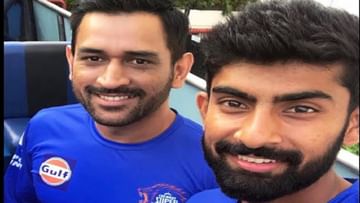 In the past, Chennai Super Kings had released N Jagadishan of Tamil Nadu. Now his bat is on fire in the Vijay Hazare Trophy.

N Jagadishan has been released by Chennai Super Kings

Now he has equaled Kohli’s record in terms of scoring 4 centuries in a season of Vijay Hazare Trophy. Jagdishan played an excellent inning of 128 runs in 123 balls against Haryana and on the basis of his innings, Tamil Nadu was successful in giving a target of 285 runs in 50 overs. This is his fourth consecutive century in this tournament.

Jagdishan also shared a 151-run partnership with Sai Sudarshan for the first wicket. Sudarshan scored a half century. In response to Tamil Nadu’s target, Haryana lost all its 10 wickets for 133 runs and with this Tamil Nadu won the match by 151 runs.


Jagdishan scored the most runs

Jagdishan is the highest run scorer in this tournament. His bat has yielded 522 runs in 5 matches at an average of 130.50. Sudarshan is at number two, he scored 427 runs in 5 matches. Talking about Tamil Nadu, the team is on top in Group C with 18 points. Tamil Nadu has won 4 matches. Talking about his performance for Chennai Super Kings, he was able to score only 73 runs in 7 matches. Apart from them, CSK has KL Asif, Adam Milne, Chris Jordan, Robin Uthappa, Hari Nishant, Bhagat Verma and Dwayne Bravo.