Dhoni’s favorite hit a six with one hand at the age of 37, the ball went out of the field, watch video 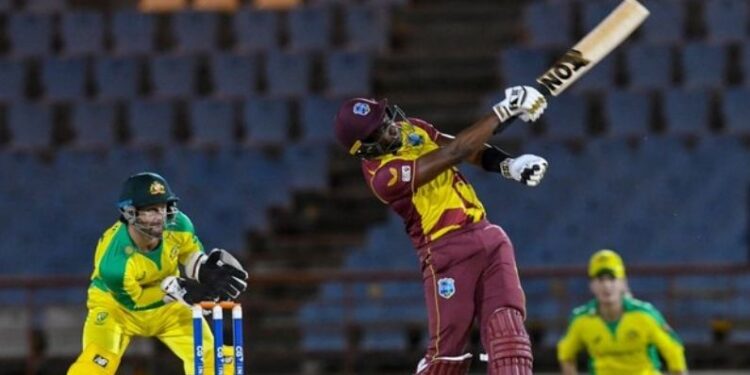 Even at the age of 37, there has been no shortage in the game of this strong player. In batting, he still hits sky-high sixes as before and if he takes the ball in his hand, he takes the wicket.

Dwayne Bravo of West Indies hit a six with one hand in the T20 series against Australia.

West Indies all-rounder Dwayne Bravo has been 37 years old but he is still rocking on the cricket field. Chennai is one of the important members of Super Kings in the IPL, so is doing wonders for the West Indies as well. During the T20 series against Australia, he has been contributing for his team with both the ball and the bat. Dwayne Bravo had scored an unbeaten seven runs in the first match and gave 16 runs in two overs. But in the second match, he showed with his batting that his stamina was still not over. He scored an unbeaten 47 runs in just 34 balls with one four and three sixes. He added 103 runs for the fourth wicket. Then, together with Andre Russell, shared a 13-ball 34-run partnership for the fifth wicket. Due to this, West Indies scored 196 runs while playing first. Bravo later also did wonders in the bowling and took a wicket in the form of Dan Christian for 29 runs in three overs.

During the batting, Dwayne Bravo hit the ball of Ashton Agar and sent the ball for a six with one hand. The ball fell on the stands of the stadium. From there she went out of the field after taking a dip. This six was of 91 meters. Ashton Agar’s ball was short, on which Bravo ran the bat in the leg side and the ball fell into the stands while traveling the sky. This incident happened on the fourth ball of the 13th. Australian players were also stunned after seeing Bravo’s shot. Bowler Ashton Agar was also left watching the ball going in the air. The way Bravo is playing right now. Chennai Super Kings and its captain Mahendra Singh Dhoni will be very happy to see him. In the second half of the IPL, this form of his can make the job of CSK easier.

The West Indies bring up 100 with a beautiful one-handed six!

what happened in the match

In the match, Shimron Hetmyer’s stormy half-century helped West Indies beat Australia by 56 runs to take a 2-0 lead in the five-match series. Hetmyer played an innings of 61 runs in 36 balls with the help of four sixes and two fours before being run out. He added 103 runs for the fourth wicket with Dwayne Bravo (47 not out in 34 balls, three sixes, one four) when the team was in trouble after losing three wickets for 59 runs. Bravo made an unbroken partnership of 34 runs with Andre Russell (24 not out in eight balls, two sixes, two fours) in the last 2.1 overs to take the team’s score to 196 for four. West Indies team added 123 runs in the last 10 overs.

For Australia, Mitchell Marsh (54) scored a half-century in the second consecutive match but the other batsmen failed once again, leaving the team for 140 runs in 19.2 overs. Apart from Marsh, only Moises Henriques (19) and Josh Filippi (13) could reach double digits. For West Indies, leg-spinner Hayden Walsh took 3 for 29 while Sheldon Cottrell took 2 for 22.