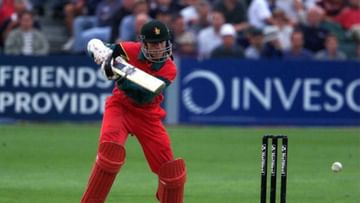 This Zimbabwean cricketer hunted Sachin Tendulkar in his debut match. However, the career of this brilliant all-rounder could not last long.

Neil Johnson had earned a name in a very short time.

There was a time when the Zimbabwe cricket team was known by the names of the Flower brothers – Andy and Grant. Heath Streak was also a name that used to be discussed, but then in 1998 came a player who gave a lot to Zimbabwe cricket with his game. The career of that player did not last long, but in his short career, this player earned a lot of name and showed a great game for Zimbabwe. This player is Neil Johnson. Talking about Neil because today i.e. January 24 is his birthday. Neil was born in 1970.

He was born in Zimbabwe but left the country at the age of 10 due to his father’s job and went to South Africa. But looking at his game, Zimbabwe Cricket invited him to return home. Neil accepted this offer and on October 7, 1998, he made his international debut with a Test match against India.

India’s great batsman Sachin Tendulkar had become a big batsman in world cricket at that time. He was being counted among the great batsmen. In his very first Test match, Neil made Sachin his victim. That too not once but twice. Neil dismissed Sachin in both the innings of this match. Although he could not contribute much with the bat in this match, but he did wonders with his bowling. It was from here that Neil started making his mark. He used to open for the team in ODIs and also had the power to handle the new ball.

Zimbabwe has been playing the World Cup for a long time but it has never been in the World Cup winning teams. Although in 1999, this team showed a great game and at one time it seemed that this team would reach the semi-finals. The reason for this was the performance by Neil. He was Zimbabwe’s top scorer and highest wicket-taker in this World Cup. In eight matches of this World Cup, Neil took 12 wickets and scored 367 runs at an average of 52.42. Zimbabwe’s team was successful in reaching the Super-6 on the basis of his all-round game.

His best performances in this World Cup came against South Africa and Australia. Against South Africa, he played a brilliant inning of 76 runs and took three wickets for 27 runs. On the basis of his performance, Zimbabwe defeated South Africa by 48 runs. At the same time, he played the best innings of his ODI career against Australia and scored 132 runs. He hit four fours in one over of Shane Warne. He became man of the match three times in this tournament.

Career ended early because of this

In the year 2000, Neil said goodbye to his international career. The reason for this was his dispute with the Zimbabwe Cricket Board. He and the board were determined on the issue of salary and this player had retired. After this he played in county cricket. In 13 Test matches played for Zimbabwe, Neil scored 532 runs at an average of 24.18, including one century and four half-centuries. At the same time, in 48 ODIs, this batsman scored 1679 runs at an average of 36.50. Neil scored four centuries and 11 half-centuries in ODIs.