Defeated by 317 runs, now board hit, coach-captain will take class, answer has to be given in 5 days 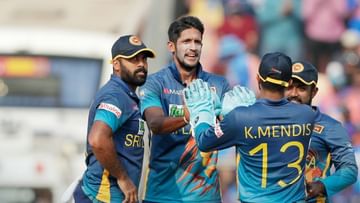 The Sri Lankan team had to face defeat by a huge margin of 317 runs in the third ODI against India. This was the biggest defeat in terms of runs in ODI history.

Sri Lanka was defeated in both ODI and T20 series in India.

The Indian cricket team, captained by Rohit Sharma, defeated Sri Lanka by a huge margin of 317 runs on Sunday. This is the biggest win in terms of runs in ODI history. With this, Team India won the three-match ODI series 3-0. After the defeat by such a huge margin, there has been an earthquake in Sri Lankan cricket and its board has become very strict. Sri Lanka Cricket Board has summoned the manager of the national team after this defeat and asked him to submit a report on this defeat.

Batting first in the third ODI played in Thiruvananthapuram, India scored 390 runs losing five wickets in the allotted 20 overs. The Sri Lankan team completely faltered in front of this huge target and got piled on just 73 runs. Virat Kohli played an unbeaten inning of 166 runs in this match. Shubman Gill also scored a century and scored 116 runs.

Captain, coach will tell the reason

The statement further read, “The board would like to understand from these people what is the reason behind the poor performance against Team India in the last ODI.”

Sri Lanka Cricket (SLC) has directed the Manager of the National Team to submit a report pertaining to Sri Lanka’s heavy defeat faced against India in the 3rd ODI, which was played on the 15th January 2023 at Thiruvananthapuram.https://t.co /2HuuJCNJW8#INDvSL #SLC

Failure in both series

The Sri Lankan team was on a tour of India where it played three ODIs and T20I series of the same number of matches. The first T20 series was played between the two teams and in this series, Team India won 2-1. After this, Team India badly washed Sri Lanka in the ODI series and did not allow them to win a single match. India won this ODI series 3-0. India had scored more than 350 in the first and last ODI. In the total of six matches played in India, the Sri Lankan team could win only one match.