Clark was washed by the shoe-slippers, loss of crores after he was beaten up by his girlfriend 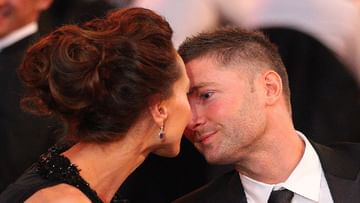 In the past, Michael Clarke was badly beaten up by his girlfriend. Clarke was slapped by girlfriend after accusing him of cheating

Michael Clarke is in trouble

Former Australian captain Michael Clarke’s troubles have increased after getting beaten up by his girlfriend. First his image was damaged and now he has suffered a loss of crores. Recently, a video of Clarke went viral on social media, in which his girlfriend Jade Yarbrough was seen beating him fiercely. Yarbrough accused him of cheating. After this video went viral, the Australian company that makes shoes and slippers has made it clear that it will no longer work with Clarke. A major brand of footwear and clothing has decided to distance itself from Clarke.

worked with clark once

Their brand has only worked with Clarke once, the company did a Father’s Day shoot with him in early September last year, the statement said. Now the brand will never work with Clarke again in the future. With this, the possibility of Clarke getting a deal worth crores with this brand in future has also come to an end.

Not only this, such news is also coming that Clarke can also be dropped from the commentary panel of India Australia Test series. The BCCI had tied up with the former Australian captain for the commentary panel, but now according to media reports, the board has made up its mind to oust him, if this happens, he may suffer a loss of around Rs 82 lakh.

planning to move to india with ex girlfriend

In the past, Clarke went on holiday with his girlfriend, her sister and husband, where the girlfriend beat him up accusing him that he had met his ex-girlfriend Pip Edwards and was planning to visit India with her. were. Jed Yarbrough’s sister pulled him in to handle the matter, but Clark found himself in trouble after video of the brawl went viral.