Boxer Vijender Singh lashed out at Haryana government, criticized for not giving promotions to players 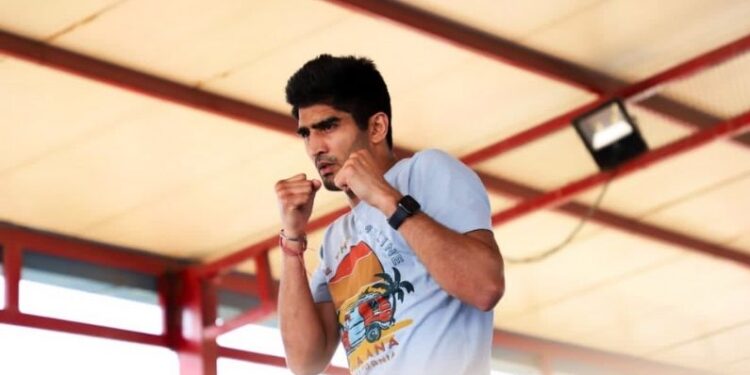 Vijender Singh was among the 12 players who were given jobs in this post but now he does not work for the Haryana Police.

Indian star boxer Vijender Singh slammed the Haryana government for not giving promotions to players who have won medals at the international level even though the state police had appointed him because of his sporting achievements. Eight players are fighting a legal battle with the Haryana state government for “pending promotion” who were hired by the state police as DSP a decade ago for their sporting achievements. Vijender was also one of the 12 players who were given jobs in this post but now he does not work for Haryana Police. Wrestler Yogeshwar Dutt and hockey player Sandeep Singh decided to enter politics and are now with the ruling BJP government in the state.

Vijender tweeted, ‘The previous government gave jobs to the medal winning players but the present government is not ready to give promotions to the players. Is this the truth of a government making big claims? On the one hand, ‘Cheer4India’ and on the other hand the players are ignored, now there is hope from the court itself.’ The players awaiting promotion include former T20 World Cup winning cricketer Joginder Sharma, former women’s hockey team captains Surinder Kaur and Mamta Kharab, former men’s hockey team captain Sardar Singh, Commonwealth and Asian Games medalist wrestler Geetika Jakhar and Olympian. Boxers Akhil Kumar and Jitender Kumar are included.

#Haryana The previous government gave jobs to the medalist players.. but the present government is not ready to promote the players.. Is this the reality of the governments making big claims? one side #Cheer4Indiia On the other hand, ignoring the players, now expect from the court.

Promotion case is going on in High Court

A source close to the knowledge of the legal process said, “The matter is currently in the Punjab and Haryana High Court. In the last hearing held in May, the Haryana government had sought more time to respond. The next date of hearing is August 20, then the state government is expected to present its side in this matter. The source said that the promotions were pending after 10 years of service. The Haryana government says that these players were active in sports even after joining the job. In such a situation, he did not actively work. But after the completion of the playing career, the players are doing duty.

read this also: Lionel Messi will support Barcelona even after 50 percent cut, will bear a loss of 20 million every week