Beijing Olympics 2008: Abhinav Bindra created golden history in Beijing, till date no Indian has been able to repeat 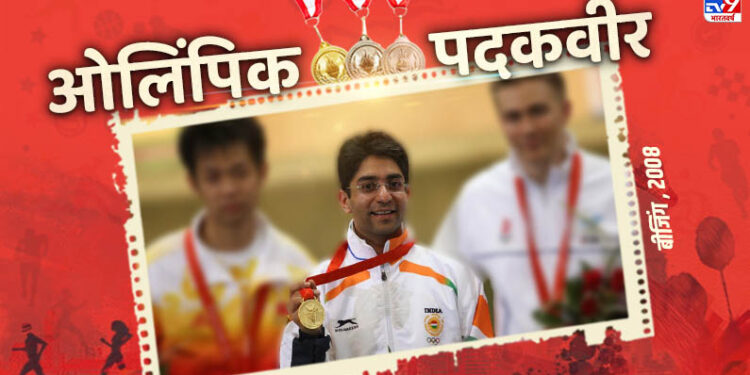 Abhina Bindra won the first individual Olympic gold medal for India at the 2008 Beijing Olympics. no one else has been able to do this yet

Abhinav Bindra is the only gold medal player of the country

The 2008 Beijing Olympics was special for India for many reasons. This was the first time that India had won three medals in the same Olympics. For India, in 2008 Beijing, Vijender Singh won the bronze medal in boxing and Sushil Kumar in wrestling. Today we will not talk about them, today we will talk about the third medalist of Beijing, Abhinav Bindra, who got India’s first individual gold. Bindra had won the country’s first individual gold medal in the Olympic Games held in Beijing. After a long wait of 108 years, India finally got this gold. Bindra created history in 10m Air Rifle. A history that has never been repeated.

In the 2004 Athens Olympic Games, Bindra could not even reach the final of the event. That year when Rajyavardhan Rathod got the silver medal and stood on the podium, Bindra had decided to see him win gold for his country no matter what happened. With four years of hard work, training abroad, he fulfilled his dream in Beijing.

Bindra was ready to spend everything in Beijing

After missing out on a medal opportunity in Athens 2004 four years ago, Abhinav Bindra roared like a hungry lion at the Olympic Games in Beijing. In the World Cup held two years before the Beijing Olympic Games, he showed his skills to the whole world by winning the gold and giving an indication of his claim. When Bindra arrived to participate in the 2008 Beijing Games, there were very few players in rifle shooting who could match him.

Qualified for final with good score

In his event at the Beijing Olympics, Abhinav Bindra took 596 points out of 600 in the qualification round. He reached the final as the number four shooter. Romanian shooter Jorge Alin Moldoveanu was with him. Another Indian shooter Gagan Narang could not qualify for the final. He finished at number 9 and dropped out. In the final, Bindra raised his game quite high. He never hit less than 10 points in any round.

Gold was won by defeating the defending champion

Apart from Bindra, the strong contenders for winning the 10m Air Rifle event were Zhu Qinan of China and Henry Hakkinen of Finland. Finland’s Henri Hekkinen, who topped the qualification stage, was tied with Abhinav Bindra till the last shot, but he could not beat Bindra at crucial times and could only score 9.7 in his final shot. Meanwhile, the Indian player scored around 10.8. Abhinav Bindra surpassed 2004 Athens Olympic gold medalist Zhu Qinan to complete the 10m men’s air rifle with a score of 700.5, with Zhu Qinan having to be content with the silver medal.