Before Tokyo Olympics, India got world champions in wrestling, Aman and Sagar won the gold of the cadet championship 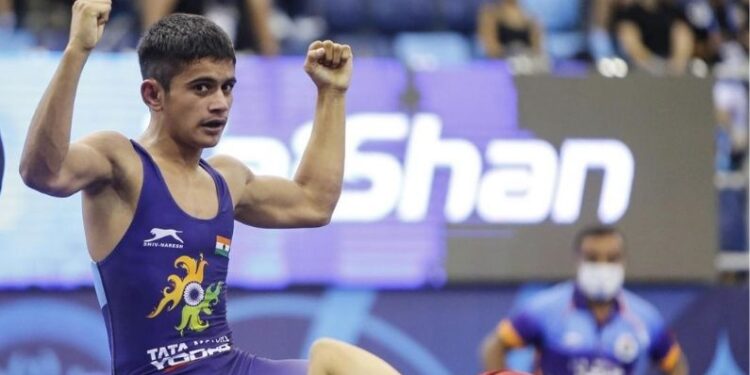 Apart from Aman and Sagar, India are hoping for one more gold medal as Jaskaran Singh won the semi-finals in the 60kg category to ensure a place in the finals and at least a silver medal.

Aman Gulia’s performance was excellent throughout the tournament and lost only 3 points. (Photo: UWW)

The eyes of the whole world are fixed on the Tokyo Olympics 2020, which is to be inaugurated on 23 July. After waiting for five years, the world’s biggest sporting event is once again starting. These Olympics are going to be special for India too, because this time India has sent its largest contingent ever. At the same time, the expectations are also high because the contenders are more than before. Medals are expected in many sports, of which wrestling is one. It has legends like Bajrang Punia and Vinesh Phogat. Before these two and the other stalwarts do some charisma, good news has come for India from the wrestling mat itself. Although it is different from Tokyo, but equally important. India’s young wrestlers Aman Gulia and Sagar Jaglan have won gold medals in the World Cadet Championship 2021.

The second day of the ongoing World Cadet Championship in Budapest, capital of Hungary, proved to be good for India, where India’s 4 medals were confirmed. While Aman and Sagar won gold medals in their respective weight categories, two other wrestlers, Sahil and Jaskaran Singh, also ensured a medal each in their respective matches.

Aman got India’s first gold medal. Aman opened India’s gold medal account by defeating American wrestler Luke Joseph Lilledahl 5-2 in the final of the 48 kg category. Aman dominated the tournament, losing just three points on his way to the title. The American player was taller than Aman and his reach was far but the Indian player battered the opponent by continuously attacking. At the same time, India got its second success in the 80 kg category from Sagar’s side. He won the second gold by defeating James Mockler Rowley 4-0.

hope for another gold

Apart from these, India also won at least one bronze medal, while a silver medal has also been ensured. In the 110 kg category, Indian wrestler Sahil won the bronze medal in the first two minutes by beating Alikhan Kuseinov of Kazakhstan. After that Jaskaran Singh also defeated Abdulrahman Ibrahimov of Azerbaijan 6-2 in the semi-finals of 60 kg to ensure at least a silver medal by making it to the final. On Wednesday, Jaskaran will take on Uzbekistan’s Kamronbek Kadamov in the gold medal bout while Chirag (51kg) and Jaideep (71kg) will fight for the bronze medal.