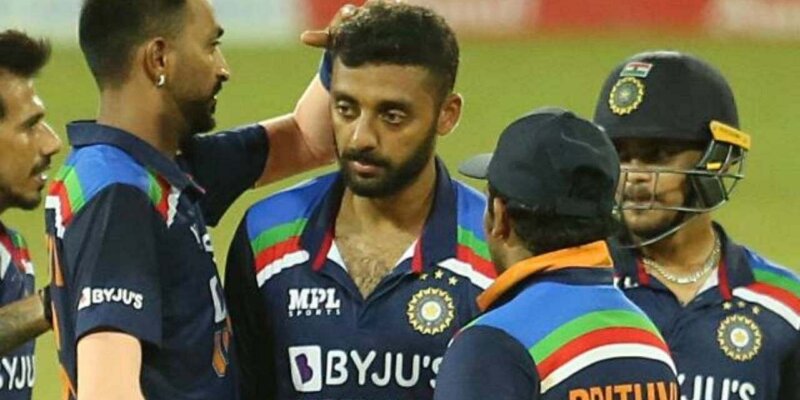 Varun Chakravarthy (centre) made his India debut from the tour of Sri Lanka.

This player is currently playing in IPL 2021. His performance in the tournament has been excellent. In such a situation, the management of Team India does not want this player to be out of the World Cup.

Varun Chakravarthy can play an important role for India in the 2021 T20 World Cup (2021 T20 World Cup). But before this, his injured knees have given a headache to the management of BCCI and Team India. Varun Chakraborty’s knee is in very bad condition. In such a situation, the medical team of BCCI is working day and night to cure him. Although October 10 is the last date for change of teams for the T20 World Cup, Varun is unlikely to leave the team until his pain becomes unbearable. The Indian team wants him to be fully fit and get his services before the match against Pakistan on October 24. Also the team management wants Varun’s workload to be taken care of.

Quoting a BCCI source related to the matter, PTI has written, ‘The condition of Varun’s knees is not good. He is in pain and the Indian team management might not have taken the risk of feeding him if the T20 World Cup had not happened. To be 100 per cent fit, he will need a complete rehab later but the focus for now is to manage his pain during the T20 World Cup. Varun Chakraborty is currently playing for Kolkata Knight Riders in IPL 2021. His performance in the tournament has been fine. He has taken 15 wickets in 13 matches with an economy of 6.73.

During this, his performance against many big teams has been excellent. It is understood that the medical team of Kolkata Knight Riders is in constant touch with BCCI regarding Varun. A senior official said, “As far as I know, the support staff of KKR has prepared a detailed chart for Varun’s strength and conditioning. It is part of the injury recovery program. He is also being given pain relieving injections so that he can bowl four overs without any trouble. Due to injections, there is no pain for a certain time. You will not see this on TV. He is in pain when he is not bowling.

Varun is forbidden from diving

It is understood that Varun Chakraborty has been asked not to dive while fielding. Along with this, they have also been prevented from moving to the side. But will Varun be able to do this till the T20 World Cup because KKR also need him and IPL is also a very tough tournament. Regarding this, a senior player of the team said, “Good captains know how to hide fielders who know only batting or bowling. Varun is needed to bowl four overs. He is not expected to field like Jaddu (Ravindra Jadeja) or Virat.

Decision on approval of covaccine will be taken next week, experts reviewing data of Bharat Biotech – WHO

In the popular conversion case, UP ATS again turned its eyes on Maulana Kalim Siddiqui, raids at many places in NCR including Shaheen Bagh