BBL: Was all out for 15 runs in the second match, now made a place in ‘Finals’ 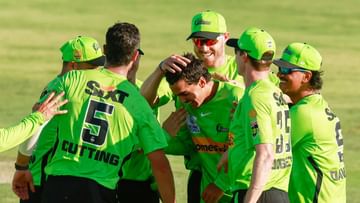 The journey of the Sydney Thunders team in the Big Bash League has been full of ups and downs. Despite this team’s poor start, it has reached the playoffs.

Luck can turn at any moment in the field of play. Sometimes on the throne and sometimes on the floor. If anyone wants to see the latest example of this, then one can see the condition of Sydney Thunder, the team of Big Bash League, which has touched the heights of the sky within a few days. (Getty Images)

Although the whole cricket game is called a game of uncertainties, but especially T20 is such a format where it is not known when the status of the match, the status of the league will change. Australia’s big bash league Something similar was seen in IPL where a team was all out for just 15 runs a few matches ago, the same team has now reached the finals (playoffs) of this league. Just a few matches ago, the team which was in discussion due to disappointing records, now the same team is at the fourth position in the points table.

All the matches of the group round of the Big Bash League have been completed. After the league matches, the four teams for the finals have been decided. Perth Scorchers, Sydney Sixers, Melbourne Renegades and Sydney Thunder have progressed. On the other hand, Melbourne Stars, Hobart Hurricanes and Brisbane Heat are out of the league apart from the Adelaide Strikers who gave a humiliating defeat to Sydney Thunders.

Sydney Thunders made it to the finals

The Sydney Thunders team came out to play an important match against the Melbourne Stars on Wednesday. In this match, the Melbourne team batted first and scored 119 runs. This goal did not become much of a challenge for Sydney Thunders. He achieved this target easily in just 18.5 overs. With seven wins and seven losses in 14 matches, this team scored 14 points. She finished fourth in the points table and has qualified for the playoffs.

,@ThunderBBL win it with seven balls to spare and get through to the finals! #BBL12 pic.twitter.com/m8qw36ZCkk

On 16 December, the Sydney Strikers team came out to play against the Adelaide Strikers. Adelaide Strikers all out Sydney Thunder for just 15 runs. This became the lowest score in Big Bash League history. The Adelaide team scored 140 runs while batting first in this match. In response, the Sydney team got all out after scoring only 15 runs in 35 balls. Not a single batsman of Sydney Thunder could touch the double figure. No batsman of the team could play more than 6 balls. However, after this defeat, the team made a tremendous comeback and now it has reached the playoffs.