Bangladesh made a splash in ODIs on the strength of the captain, made the target of 298 runs a toy, eliminated the opposing team 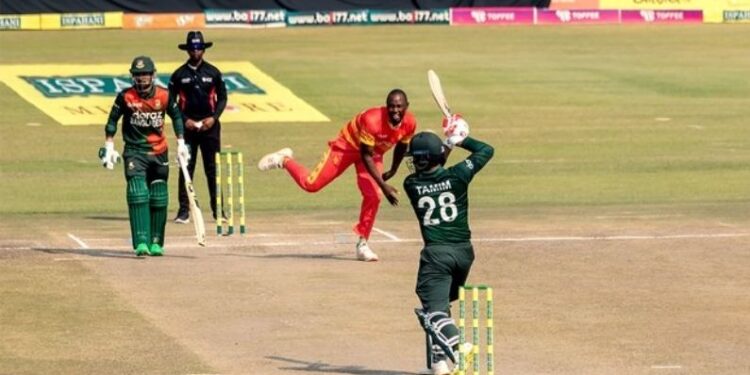 Opener Tamim Iqbal scored a century in 97 balls with the help of eight fours and three sixes. This is his 14th century in ODI cricket.

Bangladesh eliminated Zimbabwe in the ODI series thanks to Tamim Iqbal’s century.

Captain Tamim Iqbal’s 112-run innings helped Bangladesh beat Zimbabwe by five wickets in the third ODI on 20 July to clinch the three-match series 3-0. Zimbabwe’s team got all out for 298 runs in 49.3 overs after getting the invitation to bat first. In response, Bangladesh won the match by scoring 302 runs for five wickets with two overs remaining. Opener Tamim scored a century in 97 balls with the help of eight fours and three sixes. This is his 14th century in ODI cricket.

Tamim Iqbal shared 88 with Liton Das (32) for the first wicket, 59 with Shakib Al Hasan (30) for the second wicket and 57 runs for the third wicket with Mohammad Mithun (30). carried on. Donald Tiripano (2 for 61) sent Tamim and Mahmudullah (nil) to the pavilion in the 35th over by sending Tamim and Mahmudullah (nil) to the match but Nurul Hasan (45 not out) and Afif Hossain (26 not out) made a comeback in the last overs. The swift innings gave the team victory.

Earlier, Zimbabwe scored a challenging 298 runs with half-centuries from Regis Chakabwa (84), Sikandar Raza (57) and Ryan Burle (59). Apart from these, the rest of the batsmen disappointed. Zimbabwe lost five wickets for 172 runs in 34 overs despite Chakabwa’s 84 runs off 91 balls with the help of seven fours and a six. But Sikandar Raza and Ryan Burle put together 112 runs for the sixth wicket and took the team to a fighting score. Raza was dismissed for the sixth wicket after scoring 57 off 54 balls with seven fours and a six. Zimbabwe’s batting collapsed after his departure. Burle out after scoring 59 runs in 43 balls with four fours and four sixes. Donald Tiripano (0), Tendai Chatara (1) and Blessing Mujarbani (0) were cheap tackles and Zimbabwe could not play the full 50 overs.

Zimbabwe lost their last five wickets within 14 runs. This lost his chance to score 300 plus. Mohammad Saifuddin and Mustafizur Rahman took 3 wickets each for Bangladesh. A three-match T20 International series will be played between the two countries from July 23.

read this also: KL Rahul scored a century after one and a half years, did wonders at number 5, saved the shame of Team India in trouble