Balls fell from throw, batsman also out of crease, yet Abhimanyu not out 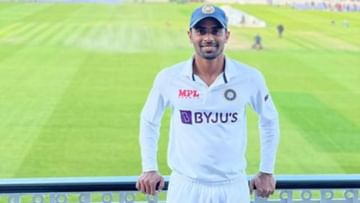 An unofficial Test match is being played between India A and Bangladesh A, where India take the lead over Bangladesh

If the bails fall due to the fielder’s throw and the batsman is also out of the crease, then the atmosphere of celebration starts in the bowling team. The batsman also has to return to the pavilion, but something amazing happened with India’s Abhimanyu Easwaran. He was very lucky in this matter. In fact, the first unofficial Test match is being played between India A and Bangladesh A, where such a scene was seen on the ground on the first day. The Bangladesh team was reduced to 112 runs while batting first. After this, the India A team came out to bat and made a strong start and scored 120 runs without any loss till the end of the first day’s play. With this, India also got a lead of 8 runs.

Opener Yashasvi Jaiswal scored 61 and captain Abhimanyu remained at the crease after scoring 53 runs. Abhimanyu was a little lucky in this match. Bangladeshi players were also surprised to see their luck. Luck favored Abhimanyu in the 9th over of India’s innings.

Abhimanyu was out of the crease

Abhimanyu took a single off fast bowler Khalid Ahmed, but the fielder standing at mid-on ran fast and threw towards the non-strike end. The bells were also shaken by this throw of his. Ahmed and the rest of the Bangladesh A players appealed for a run out against Abhimanyu, but the umpire rejected their appeal. After this, it was clearly seen in the replays that when the stump was shaken by the throw, then Abhimanyu was millimeters away from the crease. The video of this incident is going viral on social media.

Talking about the first day of the first Test match being played between India A and Bangladesh A, the Indian bowlers all out Bangladesh’s innings for 112 runs in 45 overs. Saurabh Kumar took 4 and Navdeep Saini took 3 wickets. After this Yashasvi and Abhimanyu created a ruckus with the bat. Yashasvi has scored 61 runs and Abhimanyu has scored 53 runs on the first day.