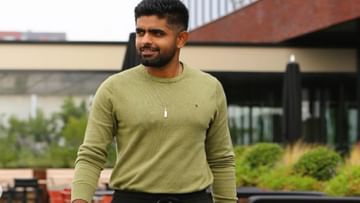 According to Pakistani media, Babar Azam has been caught sexting his own teammate’s girlfriend.

Babar Azam seems to be in trouble

Pakistani captain Babar Azam is seen getting into big trouble. Till now his captaincy was in danger, but now his image also seems to be deteriorating. According to media reports, Babar Azam has been caught in the honey trap. According to reports, he has been caught sexting with the girlfriend of his own teammate. His videos and pictures are also going viral. Not only this, only personal pictures of Babar were shared on one Instagram account.

Under the captaincy of Babar, the Pakistani team reached the final of the T20 World Cup held last year. He often remains in the limelight, but this time he came into the limelight for the wrong reasons. Many personal pictures and audio recordings of the Pakistani captain were leaked on social media last day. After which there was a ruckus on the pictures of the Pakistani captain from Sunday night itself. However, some also believe that this ploy has been used to tarnish the image of Babar Azam.

Babar Azam had earlier also been accused of exploitation, intimidation and blackmail by a woman. However, later the woman withdrew her complaint. In this case, the Lahore court had even ordered to register a case against Babar. In 2020, a woman had alleged that the Pakistani captain sexually assaulted her on the pretext of marriage and then got her aborted. Later, the woman who made the allegations had told all the allegations to be false.

I hope allah is watching all this.

Talking about Babar, his captaincy is also under threat. In the past, there was also news that Babar’s hold in the team is weakening and the Pakistan Cricket Board is planning to appoint different captains in all the three formats. Shan Masood is considered a strong contender for the captaincy, who was the vice-captain of the ODI series against New Zealand.