Babar Azam hit a stormy century in England, got big records, left the veterans behind 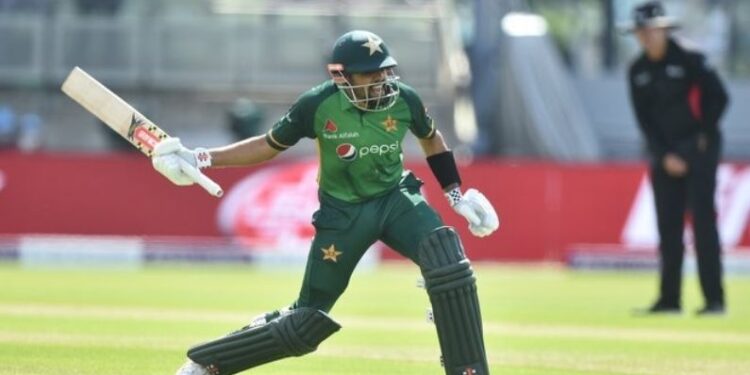 Babar Azam scored 158 runs in 139 balls with 14 fours and four sixes. This is the 14th century of Azam’s ODI career. Also, he is the first Pakistani captain who has scored 150 plus in ODIs.

Babar Azam scored 150 plus for the first time in ODIs.

After failing in the first two ODIs against England, Babar Azam played a brilliant innings and scored a century in the third match. He scored a career-high 158 runs. On the basis of this innings, Pakistan scored 331 runs for nine wickets in the last match. Babar Azam scored 158 runs in 139 balls with 14 fours and four sixes. This is the 14th century of Azam’s ODI career. Also, he is the first Pakistani captain who has scored 150 plus in ODIs. Also, 38 years later, a Pakistani captain has scored a century in England. Apart from Babar Azam’s record-breaking innings, Mohammad Rizwan (74) and Imam-ul-Haq (56) scored half-centuries.

With this, Pakistan, recovering from the drought of runs in the first two matches, scored a huge score this turn. Although the series has already been won by England. If they want to eliminate 3-0 in the series, then 332 runs will have to be scored. Brydon Cars took the highest five-wicket haul for England. This is his first five-wicket haul in international cricket. Due to cars, Pakistan lost six wickets for 26 runs in the last over. At one point his score was 305 for three and after 50 overs his score was 331 for 9.

England captain Ben Stokes won the toss and elected to bowl first. Like the first two matches, this time also Saqib Mahmood gave success to the English team. After scoring six runs, Fakhar Zaman was caught by Jack Crawley. It seemed that this time also the story would remain the same. But Captain Babar Azam and Imam-ul-Haq took the lead together. Babar took a long time to score the first run today and was very careful in the beginning. He scored the first run after playing 14 balls. But then scored fast. There was a 92-run partnership for the second wicket between Imam and Babar. With this, Pakistan crossed the 100-run mark in the 25th over itself. After scoring 56 runs in 73 balls with seven fours, he was bowled by a tremendous delivery from Matt Parkinson.

After his departure, the wicket-keeper batsman Mohammad Rizwan accelerated Pakistan’s run-rate. Both he and Babar scored fast. Babar completed his 14th ODI century in 104 balls with nine fours and two sixes. He is the fastest batsman to score 14 centuries among men. After Babar, Rizwan completed his fifty in 42 balls with six fours. Together with Babar, he made a century partnership for the third wicket in 76 balls. Both added 179 runs and took Pakistan to a big score.

Mohammad Rizwan fell victim to Brydon cars after scoring 74 off 58 balls with eight fours. After this, Sohaib Maqsood (8), Hasan Ali (4) and Faheem Ashraf (10) got out in the process of scoring fast runs. However, Babar stood firm during this and he crossed the 150-run mark in ODIs for the first time.

read this also: Chris Gayle was able to score 102 runs in 9 innings, Pollard said one thing before the match and a storm came on the field