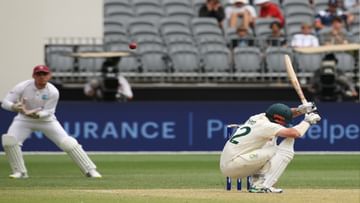 Scoring a Test century for any batsman is no less than a dream. Because scoring hundreds in the most difficult format is not a child’s play. That too not on the Perth pitch at all. Two Australian batsmen scored double centuries in the first innings of the first Test against the West Indies on this pitch. Smith scored an unbeaten 200 while Labushen played an inning of 204 runs. Australia scored 598 runs in the first innings, but in the midst of all these exploits, the players and fans of this team were heartbroken. In fact, the Perth pitch where two double centuries were scored travis head He missed out on scoring a century, that too by just one run.

Travis Head was bowled by West Indies captain Craig Brathwaite on a personal score of 99 runs. Head tried to cut Brathwaite’s ball but the ball took the inside edge of his bat and went on the wicket. In this way, Head missed his fifth Test century by just 1 run.

Travis Head looked very disappointed after being bowled. His teammate Steve Smith, who had completed his double century just seconds earlier, was seen consoling Head. There was a sudden calm in Perth. No one believed that the head got out against the part time bowler.

Getting a reprisal on 99 isn’t for everyone 😉

Travis Head chopped on when on the verge 🙃#AUSvWI pic.twitter.com/EsxqkNp78p

Let us tell you that only one Australian batsman failed in the first innings of Perth Test. David Warner got out after scoring 5 runs. After him Khawaja played an inning of 65 runs. At the same time, Labushen and Smith scored double centuries. Head also hit 99 runs in a quick manner. Let us tell you that the highest partnership of 251 runs for Australia was between Steve Smith and Labushen. After this, Smith and Head added 196 runs and Khawaja-Labushen shared a 142-run partnership for the second wicket.