Australian player forgot to bowl in front of Steve Smith, gave 16 runs in one ball 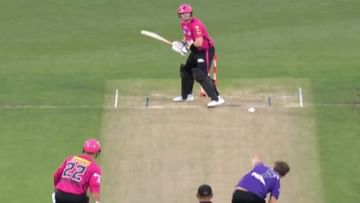 What did the Hobart Hurricanes bowler do?

The whole game in cricket is of form. If the form is good then you hit sixes and fours even on the best balls, whereas if the form is bad then you get out even on full toss. Same is the case with the bowlers. The day they are in color, the batsmen can’t even breathe and when the day is bad, the ball doesn’t hit the ground. something like bbl Got to see in the 53rd match of 2022-23. In this match, Hobart Hurricanes fast bowler Joel Paris forgot to bowl. He looted 16 runs on one ball.

Joel Paris took 32 runs in 3 overs in this match but in his first over he crossed the limit. Paris looted 16 runs in one ball in front of Smith. In fact, Joel Paris hit Smith for a six on the third ball of his first over, which was a no ball. After this, he threw the free hit ball wide towards the leg side. Even the keeper could not catch that ball and the Sixers got 5 more runs on this ball. Once again the Sixers got a free hit and Smith hit a four on that too. In this way, Joel Paris looted 16 runs in one over.

In this match, Sydney Sixers took full advantage of the weak bowling of Hobart Hurricanes. He scored 180 runs for 7 wickets in 20 overs. Steve Smith once again broke down on the bowlers. Smith, who scored a century in the last two matches, scored a half-century. Smith’s bat yielded an inning of 66 runs in 33 balls. Smith hit 6 sixes and 4 fours. His strike rate was more than 200.

15 runs off one legal delivery!

Smith replied to the critics

Let us tell you that Steve Smith was not considered fit for the T20 format. In the T20 World Cup, Steve Smith was given a chance in only one match. Tim David was preferred in his place. But now Steve Smith remains the player with the most sixes in the Big Bash League. This player has hit 24 sixes in 4 matches while Tim David has played 12 matches for 18 sixes.

Steve Smith has so far scored 328 runs in 4 matches in the Big Bash League. Which includes 2 centuries and a half-century. Smith’s batting average is 109.33 and his strike rate is also above 180.