Australian Open: Stefanos Tsitsipas made it to the quarterfinals, Azarenka also progressed 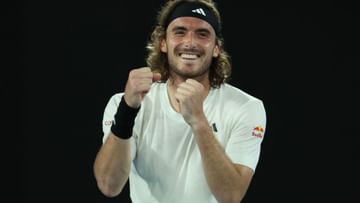 Korda defeated 2021 US Open champion Danil Medvedev. Now it will be from Karen Khachanov. While Tsitsipas has also moved forward

Stefanos Tsitsipas is a player from Greece.

Third seed Stefanos Tsitsipas of Greece and Sebastian Korda of the United States advanced to the men’s quarterfinals of the Australian Open tennis tournament on Sunday, while world number one Inga Swiatek crashed out in straight sets in the women’s section. In the women’s section, two-time Australian Open champion Victoria Azarenka entered the quarterfinals of Melbourne Park for the first time since 2016. He defeated Zhu Lin 4-6, 6-1, 6-4 in a match that lasted for two hours and 40 minutes.

The 22-year-old Korda, who beat 2021 US Open champion and last two years’ runner-up Danil Medvedev at Melbourne Park in the third round, will face 18th seed Karen Khachanov for a place in the semi-finals. Third seed Tsitsipas beat 15th seed Yannick Sinner 6-4, 6-4, 3-6, 4-6, 6-3 in a four-hour match to set up a last-eight clash with unseeded Jiri Lecheka. . In the men’s singles, Khachanov defeated 31st seed Yoshihito Nishioka 6-0, 6-0, 7-6 (4) to enter the quarterfinals.

In the women’s section, Wimbledon champion Elena Rybakina defeated Swiatek in straight sets to enter the women’s singles quarterfinals for the first time. In this tournament, 22nd seed Rybakina troubled Swiatek with her sharp serve and won 6-4, 6-4 in a match that lasted one and a half hours. Rybakina will face 2017 French Open champion Jelena Ostapenko in the quarterfinals, who defeated Coco Gauff 7-5, 6-3 in another match. Like Rybakina, Latvia’s Ostapenko has also reached the last eight of the Australian Open for the first time.

Swiatek is a three-time Grand Slam champion. He won the French Open and the US Open titles last year. Rybakina’s ranking is not an accurate assessment of her skill as she has not gained any ranking advantage after becoming the Wimbledon champion last year. The WTA and ATP then did not add points from this tournament to the players’ rankings because of the All England Club’s decision not to allow players from Russia and Belarus to enter Wimbledon. Rybakina was born in Moscow but has been representing Kazakhstan since 2018.