Ashwin’s attack in England, wreaked havoc against the British, half the team was out within 13 overs 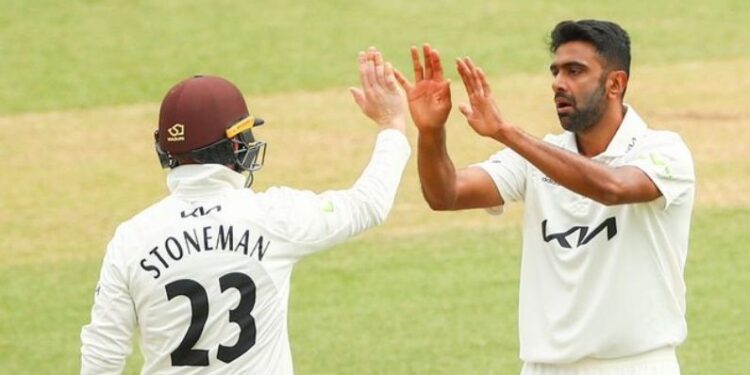 Looking at the kind of bowling Ashwin is bowling right now, it seems that he will improve his figures in England. In England in Test cricket, he has not been able to take five wickets in an innings.

Before the Test series against England, Ashwin decided to play for Surrey in the County Championship.

Indian off-spinner Ravichandran Ashwin has rocked county cricket with his bowling ahead of the Test series against England. Playing for Surrey, he overcame the disappointment of bowling and batting in the first innings and wreaked havoc on Somerset’s batsmen in the second innings. Ashwin took five wickets before lunch in the last day’s play to reduce Somerset’s score to 60 for seven. Once again he started the bowling and dismissed five batsmen for just 23 runs. Ashwin bowled 13 overs before lunch and bowled four maidens. In the first innings as well, Ashwin started the bowling for Surrey. Then after giving 99 runs in 43 overs, only one wicket came on his part. While batting there, he was out on the very first ball. Jack Leach made him his victim.

The magic of Ashwin’s spin was seen during the second innings of Somerset. He got the first breakthrough by dismissing Steven Davis (7) in his fourth over. Then in the next over, Tom Lemonby (3) was also sent off by Ashwin. In this way, he took two wickets in just six balls. After some time James Hildreth (14) also became the third victim of the Indian spinner. Ashwin completed his five-wicket haul by dismissing George Bartlett (12) and Rolf van der Merwe (7). This is his 49th five-wicket haul in first-class cricket. He is playing for Surrey for the first time and in the very first match he made a splash by taking five wickets. Somerset has three wickets left. In such a situation, Ashwin will have a chance to increase the number of his wickets.

Ashwin looking for 5 wickets in Tests in England

Ashwin’s performance is good news for India ahead of the England series. The India-England Test series will be played in the month of August-September. By then the English pitches get old and start breaking. Now with the experience of county cricket, Ashwin can do wonders on these pitches during the Test series against England. In recent times, this bowler has shown in good colours. He also took two wickets in the second innings during the final of the World Test Championship against New Zealand. In such a situation, it seems that this time Ashwin will improve his figures in England. He has not yet been able to take five wickets in an innings in Test cricket in England.