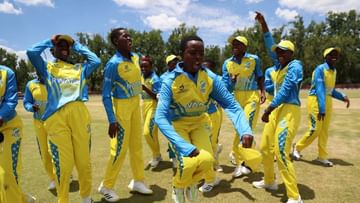 In the ICC Women’s Under-19 World Cup, Rwanda has upset and defeated Zimbabwe on Tuesday, in this victory of Rwanda, its bowler Henriette Ishimwe has contributed a lot, who has taken a hat-trick in this match. This is the second hat-trick of this World Cup. Earlier on Monday, South African bowler Madison Landesman took a hat-trick and became the first bowler to do so in this tournament. Rwanda’s Henriette went a step ahead of her. Madison took three wickets in three balls, while Henriette took four wickets in four balls.

Rwanda batted first in this match. Playing the first innings, this new fledgling team scored 119 runs losing eight wickets in the stipulated 20 overs. Zimbabwe’s status is much bigger than Rwanda in world cricket and this team has been continuously playing World Cup in different categories in ODI and T20 format. Zimbabwe’s victory seemed certain, but in front of an easy target, Zimbabwe’s team collapsed for just 80 runs.

Amazing work done in 19th over

Chasing the target, the Zimbabwe team was able to score only 80 runs in 18 overs. Henriette, who brought the 19th over, took four wickets in four consecutive balls of this over. He bowled Kudjai Chigora on the first ball without opening the account. On the next ball, he got Oleander Chare lbw. After this Chipo Moyo was bowled on the third ball. Faith Ndlambi was shown the pavilion on the fourth ball. Earlier, Henriette had bowled three overs but could not take a single wicket. He spent 13 runs in 3.4 overs in this match.

Rwanda’s batsmen, however, did not do anything special. The top order of the team played an important role in reaching the score that this team made. Only three batsmen of this team could reach double digits. Merville Uwase scored 18 runs for Rwanda. Cynthia Tuijere scored 30 runs in 44 balls with the help of two fours. Captain Gisele scored the maximum 34 runs, for which he faced 23 balls and hit five fours. As soon as these three returned to the pavilion, the rest of the Rwandan batsmen went on returning to the pavilion one after the other. Moyo took three wickets for Zimbabwe. Chigora took two wickets in his name.