72-year-old cricketer made a splash, scored an unbeaten century, a headache for bowlers, this year scored runs at an average of 98 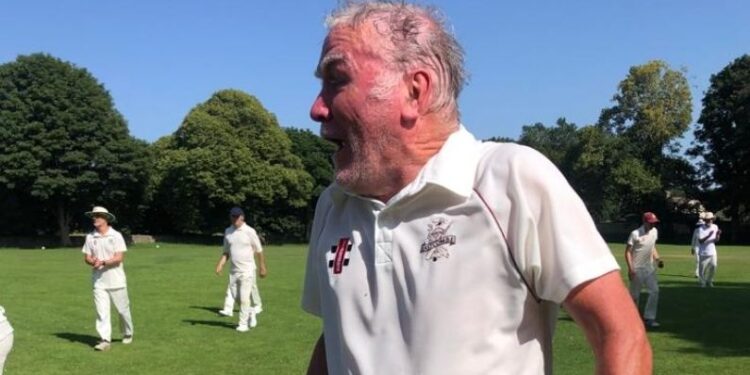 This 72-year-old player has made a splash with his batting in the year 2021. So far he has played seven matches and has scored runs at an average of 90 during this period.

Phil Barry made history by scoring a century at the age of 72.

In club cricket in England, an elderly batsman outplayed the jawans as well. The 72-year-old batsman scored an unbeaten century and contributed a lot to the team’s 11-run victory. This match was played between Eastcomb Cricket Club and Frampton on Severn Cricket Club. In this, Phil Barry of Eastcomb played an unbeaten 109. Barry’s age is 72 years. He opened and was not out till the end. Due to his century, Eastcomb scored 265 runs for four wickets in his quota of 40 overs. In response, Frampton on Severn Cricket Club could only manage 154 runs in 40 overs for the loss of eight wickets. In this way Eastcomb registered a huge victory of 111 runs.

Batting first, Eastcomb was given a good start by Phil Barry and Rich Powis. Barry scored a century, while Powis played a half-century of 57 runs. Orla Wright bowled Powis. After this Neil Holbrough (4) and Pete Smalls (5) were dismissed cheaply. But Phil Barry stuck to one end and kept the scorecard going. He got good support from Mark Powis who scored 34 runs. In this way Eastcomb scored a score of 265 runs. The condition of the Frampton team, which came to chase Lakshya, was bad. His batsmen could not compete with the bowlers of Eastcomb. Five of his eight batsmen were dismissed without opening the account.

Clifford Smith scored 28 runs for Frampton. Apart from this, 69 runs in his scorecard came from extras. These included 21 byes, 47 wides and two no balls. Frampton’s team could only manage 154 for eight after playing 40 overs and lost by 111 runs.

Congratulations to 72 year old Phil Barry – carried his bat for superb 109 not out vs @framptonos 3s on the hottest day of the year.

Phil Barry has been playing cricket for 16 years

Phil Barry has been playing club cricket since 2005. He has played 105 matches so far and scored 1451 runs at an average of 20.44. He has one century and five half-centuries to his name. He has hit 23 fours and two sixes. Phil Barry has been out 13 times in his career without opening an account. The year 2021 has been the best for him. So far this year, he has played seven matches and has scored 294 runs at an average of 98 while remaining unbeaten four times. In the season so far, he has scored a century and a half-century.

read this also: Ban before the series against India, Sri Lankan player did charisma on the fourth ball, opened the account with a six