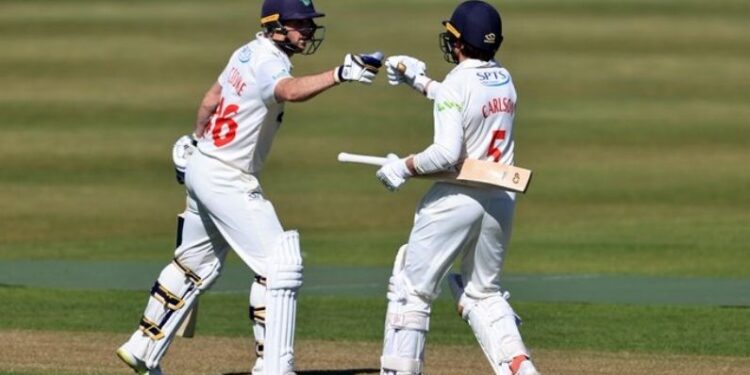 After the fall of four wickets for 155 runs, two batsmen, while batting tremendously, made the opposing team crave for a wicket. Both the batsmen added 307 runs for the fifth wicket.

County cricket is in full swing in England right now. After the break of T20 Blast, the County Championship matches have started once again. In this, the match is going on in Cardiff between Glamorgan and Northamptonshire. In the match, Glamorgan’s batsmen had a lot of fun and scored a big score of 462 runs for four wickets in the first innings. For him, Kieran Carlson and Chris Cook, number five, scored unbeaten centuries. Both shared an unbroken partnership of 307 runs for the fifth wicket. Carlsen scored an unbeaten 170 and Cook scored an unbeaten 133. Due to these two innings, Glamorgan took a crucial lead of 247 runs on the basis of the first innings. Northamptonshire was reduced to 215 runs in the first innings. His condition deteriorated in the second innings as well and lost four wickets before lunch in the last day’s play.

Glamorgan did not start well. His opening pair in the form of Joe Cook (16) and David Lloyd returned to the pavilion for 32 runs. Australia’s Marnus Labuschagne and Billy Root, who landed at number three, handled the innings. Both shared a 122-run partnership for the third wicket and took the team past 150. After playing an innings of 77 runs, Labuschagne was bowled by Luke Proctor. Labuschagne faced 103 balls in his innings and hit 12 fours. But Billy Root was also settled after one run of his departure. He too was bowled by Proctor’s ball. He scored 45 runs. Glamorgan’s team seemed in trouble after losing four wickets for 155 runs. But Kieran Carlson and Captain Cook put such fears aside.

Both retaliated and played big innings and made the Northampton bowlers crave for wickets. Carlsen faced 227 balls and hit 15 fours and played an unbeaten innings of 170. At the same time, captain Chris Cook scored an unbeaten 133 in 208 balls with the help of seven fours and two sixes. In such a situation, Glamorgan declared the innings after scoring 462 runs for four wickets.

Northampton was also drowned by the batsmen

Earlier, Northampton’s team was reduced to 215 runs in the first innings. Due to four wickets from Glamorgan’s Andrew Salter and three wickets from Tim van der Gagten, his batsmen could not make a big score. The team crossed the 200 mark thanks to Saif Jaeb’s 50 and Charlie Thurston’s 48. In the second innings also, the condition of Northamptonshire remained bad. Captain Ricardo Vasconcelos was dismissed on the second ball of the innings by Michael Neser. Neser then sent off Emilio Gay (19) and Charlie Thurston (29) too early and reduced the team’s score to 52 for three. Then Saif Jaeb was also run out after scoring 19 runs. In such a situation, there is a danger of losing the team by innings.

read this also: Ashwin’s attack in England, wreaked havoc against the British, half the team was out within 13 overs