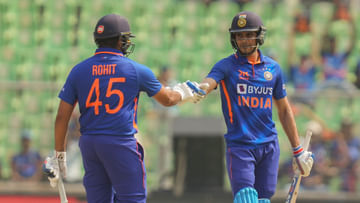 In the 4 ODIs played so far in the year 2023, Rohit and Gill have shared 50 or more runs together 3 times. If this trend continues like this, then some other big partnership will be seen between the two.

Rohit Sharma and Shubman Gill. Means Team India New opening pair of. This new pair has guts. And, how much power is there, it shows in the 4 matches played so far in the year 2023 with him. New Zealand also realized a little bit of the unity of the two in the very first ODI being played in Hyderabad. Both of them did the same against the Kiwi team, which they did against Sri Lanka earlier. Fifty plus score has been shared between the two for the third time in 4 matches this year.

So far this year, in the journey from Guwahati to Hyderabad, Rohit Sharma and Shubman Gill have at least indicated that they are going to be India’s first choice openers in the ODI World Cup. But, how did these two together lay the foundation behind it? It is equally important to know this.

Come, let’s start knowing the power of Rohit-Gil with the partnership between these two in the first ODI played in the new year. Venue Guwahati Vs Sri Lanka, 1st ODI. There was a century partnership between Rohit Sharma and Shubman Gill. Together they added 143 runs for the opening wicket.

However, both of them could not repeat their Guwahati success in the second ODI against Sri Lanka in Kolkata. There was just a 33-run partnership between the two. But, in the third ODI played in Thiruvananthapuram, both again settled at the crease and shared a close-to-century partnership. Together they added 95 runs for the opening wicket here.

This is the story of the first 3 ODIs of the year against Sri Lanka. Now talk about the first ODI against New Zealand. Rohit and Gill also took the responsibility of opening against the Kiwi team and shared a 61-run partnership together. This partnership broke after Rohit Sharma was dismissed for 34 runs.

It is clear that in the 4 ODIs played so far in the year 2023, Rohit and Gill have shared a partnership of 50 or more runs together. If this series goes on like this, some other big partnership will be seen between the two, which will be beneficial for Team India in every respect.