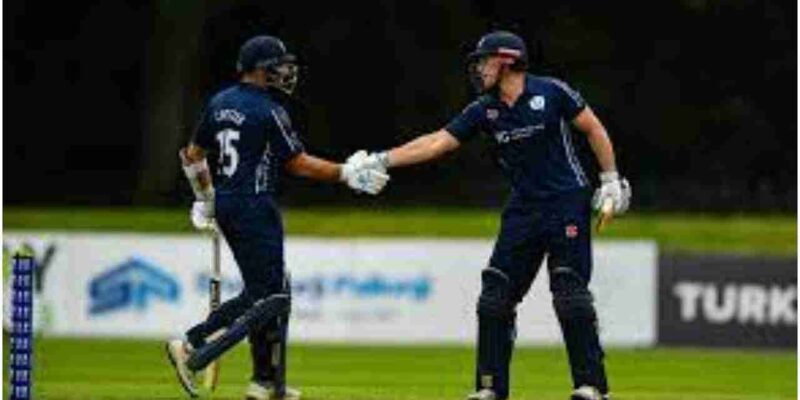 The match was of Twenty20, but it was tempered by 13 balls. There was a big roll of 13 balls in that match. 13 balls drew a winning and losing streak between the two teams. The headlines were made in the fiery batting of two batsmen. The game that the 28-year-old player started, the 34-year-old batsman finished it with a six and in this too the real strength was shown in 13 balls only. We will talk about the secret of these 13 balls, but before that let us tell you that this match was played between Papua New Guinea and Scotland.

After winning the toss, Papua New Guinea decided to bat first. The team of Papua New Guinea scored 154 for 5 in 20 overs, thanks to a brilliant 55-run knock by captain and opener Asad Vala. Apart from captain Asad Vala, Sesse Bau scored 38 runs in the middle order. Hamza Tahir was a successful bowler for Scotland with 2 wickets.

Now Scotland had a target to score 155 runs in 20 overs. And 2 batsmen did the work of penetrating this target for him. The one who started the target chasing game was 28-year-old George Munsay and the one who finished the game was 34-year-old Richie Berrington. 28-year-old George Munsay scored 50 runs in 33 balls with 7 fours and 1 six in the opening match. At the same time, 34-year-old Berrington remained unbeaten on 42 off 28 balls, which included 3 fours and 2 sixes. Due to the stormy game of these two batsmen, the Scotland team managed to beat Papua New Guinea by 8 wickets. Scotland batted so strongly in the match that even 2 wickets for Papua New Guinean bowlers were difficult.

Now you must be thinking that about 13 balls. So the strings of those 13 balls connect to the boundaries of both the Scottish batsmen. Munsey scored a total of 8 boundaries while Berrington sent the ball across the boundary 5 times. Both the batsmen scored 58 runs through these 13 boundaries. Berrington wrote the final script of Scotland’s victory with a six. And the victory that Scotland got due to this six was also got 13 balls earlier.

Also read: 21 year old bowler created a whirlwind on his birthday, surrendered to this team with career best performance

Navratri 2021: These 6 plants should be brought in this festival for good luck and prosperity

IPL 2021: David Warner gives an emotional message to SRH fans, hints that the journey with Hyderabad is over