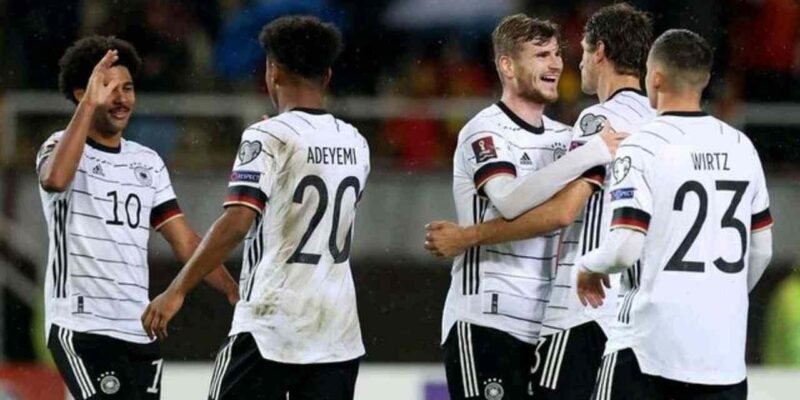 The Germany football team played well in the qualifiers of the FIFA World Cup.

Germany became the first country to qualify for the 2022 Football World Cup after beating North Macedonia 4-0 in Europe’s Group J World Cup qualifying match on Monday, despite making a lot of mistakes. Germany performed brilliantly, winning seven matches in eight matches. The team suffered a 1–2 upset against North Macedonia in Duisburg in March, its only defeat. Germany scored all its four goals in the second half. Timo Werner (70th and 73rd) scored two goals for the team, while Kei Howertz (50th) and Jamal Musiala (83rd) scored one goal each.

Turkey also kept their qualifying hopes alive after beating Latvia 2-1 on a penalty goal from Burak Yilmaz in the ninth minute of injury time. This was the first match of Stefan Kuntz, the former coach of Germany’s Under-21 team, as the coach of the Turkish team. In Rotterdam, Memphis Depay scored two goals, helped with two goals but missed a penalty as the Netherlands beat Gibraltar 6–0 to make a strong move to qualify. In Group G, the Netherlands have a two-point lead over Norway and four points over Turkey.

How were the results of the rest of the matches?

In Group H, Croatia has decided to play at least in the play-offs with a draw and Russia winning. In Group E, Wales extended their wait for Belgium to beat Estonia 1-0 thanks to a goal from Kiefer Moor. Wales and Czech Republic have the same number of points as they beat Belarus 2-0. However, the Czech Republic has played one match more. Belgium’s team is ahead by five points and it is almost certain to qualify.

In Group G, Depay put on a stellar performance for Barcelona, ​​leaving behind a bad club season. He has 14 goals to his name for the Netherlands this year and broke Patrick Kluvert’s record for most goals in a calendar year for a national team with 12 goals. The Netherlands maintain a two-point lead over Norway, who beat Montenegro 2-0.

In Group H, Croatia held Slovakia to a 2-2 draw with midfielder Luka Modric’s goal on a free kick. Russia has reached the top of the group after beating old rivals Slovenia 2-1. 2018 World Cup runners-up Croatia will now have to beat Russia next month to automatically qualify for the World Cup. In another match, Malta held Cyprus to a 2-2 draw.

Apart from Germany in Group J, Romania and Iceland were also successful in registering victories. Romania beat Armenia 1-0 while Iceland beat Lichtenstein 4-0. Romania is second in the group with 13 points. It has a one point lead over North Macedonia and Armenia.

Release Date: Announcement of release date of Salman Khan and Aayush Sharma starrer ‘Antim’, know when it will knock in theaters