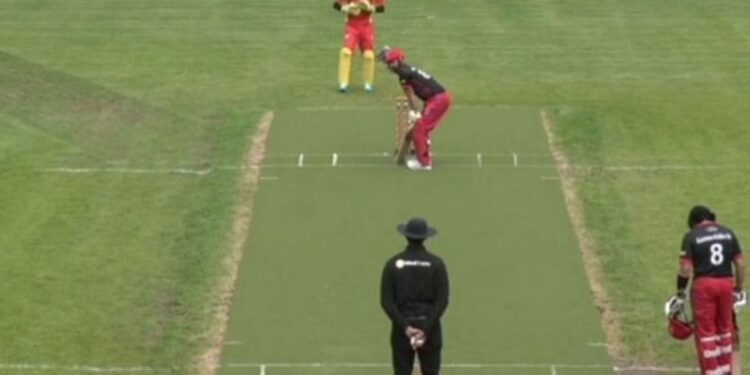 During this innings, only fours and sixes were seen raining on the field. The team of the batsman who scored the century hit 19 sixes in 10 overs.

The batsmen had a lot of fun in the Ecs T10 League.

In the European cricket series, a batsman hit the ground with a century in 28 balls. This player did this amazing in the match of 10 overs. This player, who came to the opening, lost the wicket at the last wicket but before that it rained runs. Ahmed Musaddiq, playing for Kummerfelder Sportverein, achieved this feat against THCC Hamburg. Ahmed Musaddiq scored the fastest century in the history of European cricket series by scoring a century in 28 balls. He broke the record of Indian-origin batsman Gauhar Manan. Gauhar scored a century in 29 balls against Cluj Cricket Club.

The 32-year-old took an attacking stance from the very first ball and scored 115 runs in 33 balls. Due to his innings, Kummerfelder Sportverein scored 198 runs for two wickets. Musaddiq hit seven fours and 13 sixes in his innings i.e. 106 runs in just 20 balls. He took aim at all the bowlers of THCC Hamburg and shot voluntarily. Ahmed Musaddiq made his intentions clear from the very first over. He scored 26 runs off the balls of Abhinand Jha. Since then, Musaddiq’s attacks intensified. He hit spinners and fast bowlers alike.

Musadiq Ahmed is dismissed on the final ball of the innings and KSV finish at 198/2 after 10 overs. They just fell 2 runs short of becoming the first ever team to score 200 runs in a ECS T10 match.#ecst10

Fifty in 13 balls and out on the last ball

In the fifth over of the innings, Musaddiq hit four consecutive sixes off Bahram Ali and hit a half-century in 13 balls. During this, he also made a partnership of more than 100 runs with fellow batsman. Ahmed Musaddiq completed his century by taking a single in the ninth over. Then he got out on the last ball of the innings. But by then he had scored 115 runs in 33 balls. Apart from them, Shoaib Azam Khan scored 32 runs in 13 balls with three fours and three sixes, while Dilraj Singh scored 40 not out in 14 balls with four fours and three sixes. THCC Hamburg’s Abhik Jana was beaten the most, who gave 42 runs in two overs and also took a wicket.

Chasing 198 runs, the batsmen of THCC Hamburg game spread. Only two of his batsmen could touch the double figure. In the stipulated 10 overs, the team could score only 53 runs for seven wickets. In this way he had to face defeat by 145 runs. Muhammad Hazrat Said, Ashish Sharma and Asad Ahmed Khan took two wickets each for Kummerfelder Sportverein.

read this also: The Indian who joined the Indian Airforce, got unfit to fly, then became a cricketer, the government was kind, renamed 5 acres of land