UP Election Phase 5 Voting: Deputy CM Keshav Prasad Maurya casts his vote, Raja Bhaiya said – this time he will break his record, so far these veterans have voted 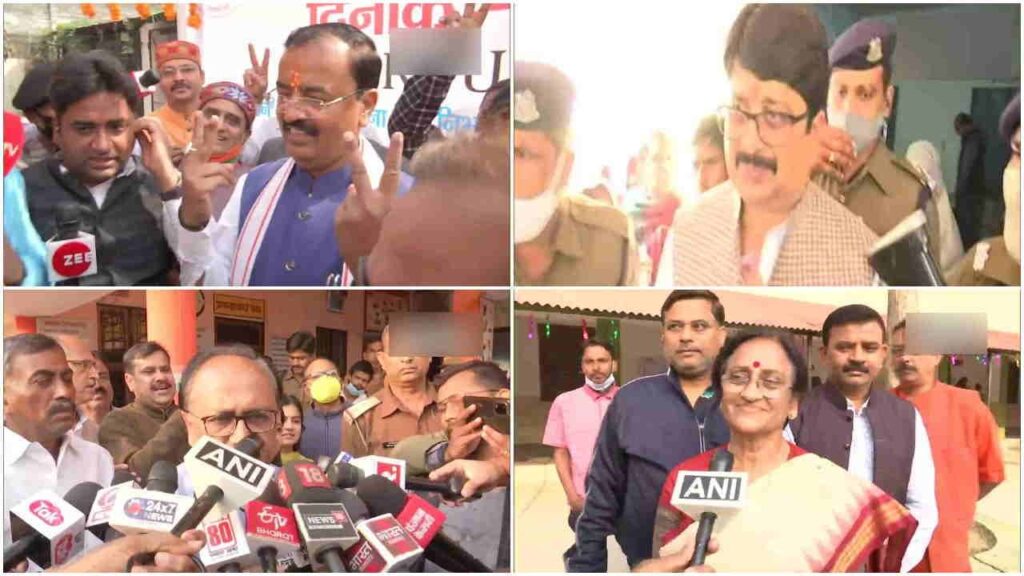 BJP candidate from Amethi Sanjay Singh casts his vote at a polling booth in Amethi. He said that this fight is of those fighting against the tyrants. Amethi was never anyone’s stronghold, it was only the stronghold of the people here and of us.

So far these veterans have voted

Uttar Pradesh (UP Election Phase 5 VotingToday the fifth phase of polling is going on. During this, the Deputy Chief Minister of the state Keshav Prasad Maurya (Deputy CM Keshav Prasad Maurya) Prayagraj (Prayagraj) in the polling station (Polling Booth) arrived and cast your vote. He said that I appeal to all sections of the people to come out of their homes and vote. We are forming the government in the state with more than 300 seats. We are winning 12 out of 12 seats here in Prayagraj. Before that he had Sirathu (Sirathu) also inspected a polling station. During this, he said that voting is also going on in Sirathu today, I have full faith that in Sirathu assembly constituency, people will win Sirathu’s son with huge votes and people all over Uttar Pradesh have made up their mind to feed lotus flowers.

Deputy CM Keshav Prasad Maurya also performed puja at his residence in Kaushambi. At the same time, the state minister Siddharthnath Singh worshiped at the temple in Prayagraj. He said that the BJP government is going to be formed. Before 2017, development, law and order had broken down. Now people feel that I have been able to give them peace, development. After this, the minister in the state government, Siddharthnath Singh cast his vote after reaching the polling station in Prayagraj. He said that BJP will cross the 300 mark.

Amethi has never been anyone’s stronghold

BJP candidate from Amethi Sanjay Singh casts his vote in the 5th phase of #UPElections2022, says, “Amethi has never been anyone’s bastion, be it Gandhis or anyone else. It has always belogned to the people…This is war against oppressors.” pic.twitter.com/35a7VpYAGE

BJP candidate from Amethi Sanjay Singh casts his vote at a polling booth in Amethi. He said that this fight is of those fighting against the tyrants. Amethi was never anyone’s stronghold, it was only the stronghold of the people here and of us. In Pratapgarh, Congress candidate Aradhana Mishra cast her vote after reaching the polling station in Sangramgarh.

BJP leader Rita Bahuguna Joshi casts her vote after reaching the polling booth in Prayagraj. He said that the government will be formed by us. We are expecting more than 300 seats. At the same time, voting is being held in Ayodhya today. Mahant Gyan Das, chief priest of Hanumangarhi temple in Ayodhya and other saints cast their vote at a polling booth in Katra. State Minister and BJP leader Ramapati Shastri has also cast his vote in Vishnoharpur, Gonda.

This time we will break our record

#UPElections2022 5th phase | Jansatta Dal Loktantrik’s Raghuraj Pratap Singh alias ‘Raja Bhaiya’, who is contesting from Kunda, casts his vote at a polling booth in Benti, says “Breaking your own record is a challenge in itself…will break my record.” pic.twitter.com/0sUt3KARPA

On the other hand, Raghuraj Pratap Singh, the candidate of Jansatta Dal Loktantrik from Kunda, cast his vote in Pratapgarh. He said that there is going to be a very good victory. In Kunda we will break our own record. Additional Chief Election Commission Officer, BD Ram Tiwari said that 8.02 percent voter turnout has been recorded in the voting being held in Uttar Pradesh from 7 am to 9 am today. Polling is going on peacefully all over the state. There were incidents of EVM malfunctioning at some places, after which they were rectified.

UP Assembly Election: Deputy CM Keshav Prasad Maurya claims Akhilesh is losing from Karhal seat, we will win the fifth phase including Sirathu by a big margin

PAK: Imran’s open warning, said- fix the date of election, otherwise we will dissolve the assembly