UP Election: BJP fielded women workers from other states, kitty party was also arranged to cater to ‘half the population’ 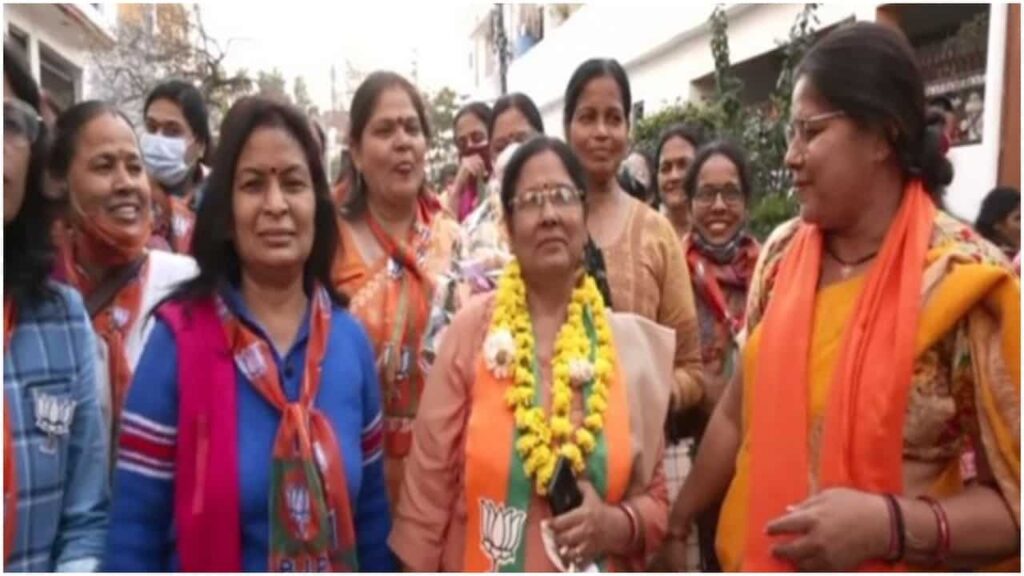 The Bharatiya Janata Party (BJP) has fielded women workers from other states for the election campaign. In this, women workers of the party have reached from Rajasthan, Haryana, Bhopal, Gujarat, Telangana, Andhra Pradesh.

Women workers of BJP from other states are campaigning.

In the first two phases of the Uttar Pradesh Assembly Election 2022, an increase in the vote percentage of women voters has been observed on the day of polling. At the same time, political parties are making all efforts to reach them and persuade them to vote for their party. Meanwhile, keeping in mind the women, the Bharatiya Janata Party (BJP) has launched ‘Lotus Kitty Club’ (Lotus Kitty Club) on the lines of kitty party.Kamal Kitti Club) is introduced. At the same time, the party has supported women workers of other states (BJP Women Party Workers) has also been fielded for election campaign in UP. These women are going door to door contacting women.

BJP women workers of other states have been fielded by BJP for election campaign. These women are meeting women from house to house and talking to them. According to ANI, women workers of the party from Rajasthan, Haryana, Bhopal, Gujarat, Telangana, Andhra Pradesh reached Lucknow on February 10. She will continue the campaign for 15 days after her arrival. Every migrant worker is campaigning for the candidate in the five assembly seats of Lucknow. BJP is also paying attention to who will go where, for example women workers of Gujarat are going to Gujarati dominated areas.

Around 7 crore women voters in this election

City President of BJP Mahila Morcha of Lucknow, Sita Negi said that whenever we go to meet women, they say that ever since the BJP government was formed here, the way women are being treated here, They are satisfied with that. Moreover, they are happy with the schemes launched and implemented for them. In fact, for the 2022 assembly elections in Uttar Pradesh, a total of more than 15 crore voters are registered, of which around 7 crore are women. At the same time, women voters have been ahead in voting in comparison to men in the last elections. Talking about the figures, in the 2012 elections, 60 percent women had voted.

Also read: Mulayam Singh Yadav came on stage for son, your story will not work without me in Karhal

Also read: AbUttarChahiye: Whose echo in Yadavland? How the SP, which won only 8 seats in the 2017 assembly elections, will change the picture

Russia has deployed its army in the Atlantic Ocean. This submarine can hit the…

Got a chance in the team after 6 years, beat Pakistan fiercely, scored a century