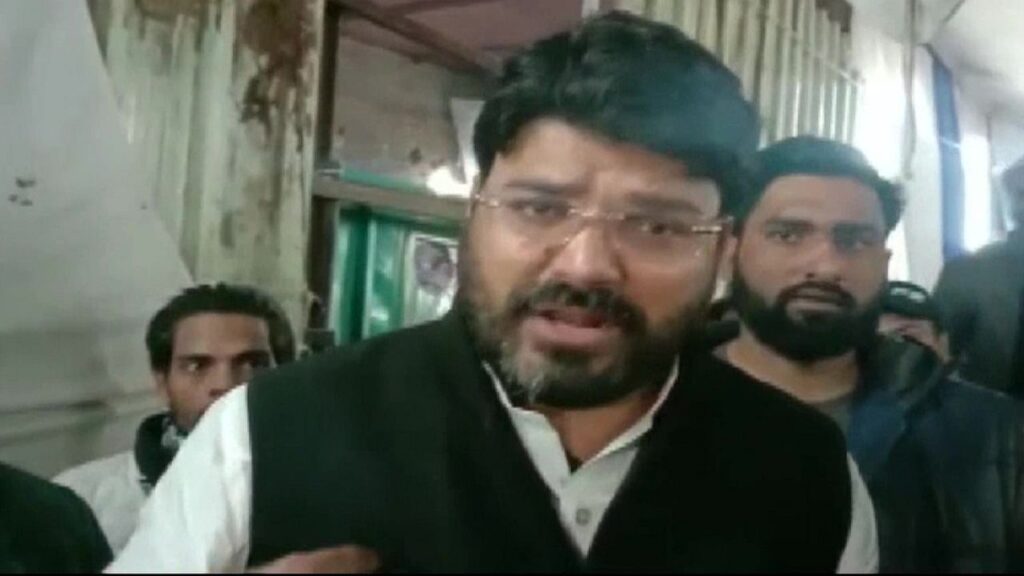 UP Assembly Election 2022: Naved Ayaz said- Police administration has threatened to account for me and SP MLAs and BJP candidates are also involved in this conspiracy. Mehboob Ali of SP is the sitting MLA from this seat.

Uttar Pradesh (UP Assembly Election 2022) of Amroha assembly seat (Amroha Assembly Seat) from Bahujan Samaj Party (BSP) candidate Naved Ayaz (Naved Ayaz) has made a big allegation in the local administration. Naved Ayaz has said that the police administration has threatened to encounter me and in this conspiracy the SP (Samajwadi Party) MLA Mehboob Ali and BJP (BJP) candidates are also included. Naved Ayaz alleges that the police lathi-charged my supporters who had gathered for a program related to the election campaign without any prior warning. Naved said, “The administration threatened me that if I insisted more, they would encounter me. SP MLA is also involved in this incident, which has got the support of BJP.”

On the other hand, on these claims of BSP candidate, Amroha CO City VK Rana says, “Police had received inputs that even after eight o’clock in the night, election campaign is going on on behalf of BSP candidate Naved Ayaz. When the police reached the spot, the people present there created a ruckus.” He said that the matter is being investigated and a case has been registered in view of the MCC violation.

Administration threatened me that if I insisted too much, they will encounter me…SP MLA and administration are involved in this incident… He (SP MLA) is also involved with BJP: Naved Ayaz, BSP candidate from Amroha pic.twitter.com/CDYKiZoaij

What is the mathematics of Amroha seat

Amroha, situated on the banks of the Ganges, has played an important role in the politics of Uttar Pradesh. The politicians here have once been in the news for making and bringing down the governments of Uttar Pradesh. In the 2017 assembly elections, out of the four assembly seats here, Bharatiya Janata Party candidates won three and Mehboob Ali won one as a Samajwadi Party candidate.

Amroha is called the district of the agitators and most of the farmers’ movements started from Amroha itself. Many parties emerged from here, and many faces Amroha was a part of Moradabad district, but the district has been getting the full benefit of being located close to the capital of the country, and provides golden opportunities from business to employment. From the film world to the cricket field, the people of Amroha made their mark. From Kamal Amrohi to cricketer Mohammed Shami, they are residents of Amroha district. On the other hand, the girls of Amroha’s Kanya Gurukul proved their mettle in archery by shooting arrows at targets not only in the country but all over the world.

Ever since the Amroha assembly seat came into existence after the delimitation, it has been occupied by Samajwadi Party’s strongman Mehboob Ali. In 2017 election also Mehboob Ali won by getting 74713 votes while Bahujan Samajwadi Party leader Naushad Ali came second. Naushad had secured around 59671 votes. Whereas the candidate of Bharatiya Janata Party stood third by getting 45420 votes. Mehboob Ali is a politician belonging to a simple family. Became MLA for five consecutive times in Amroha district. He also became a cabinet minister. Mehboob Ali’s coin still runs in politics here.

read this also: UP Election: In Hamirpur Sadar seat, BJP has not bet on Brahmin faces for the last 55 years, but these voters become game changers

read this also: UP: Security of Shri Ram Janmabhoomi complex is going to be very strict in Ayodhya, thumb impression and face scanner device will be installed at all gates