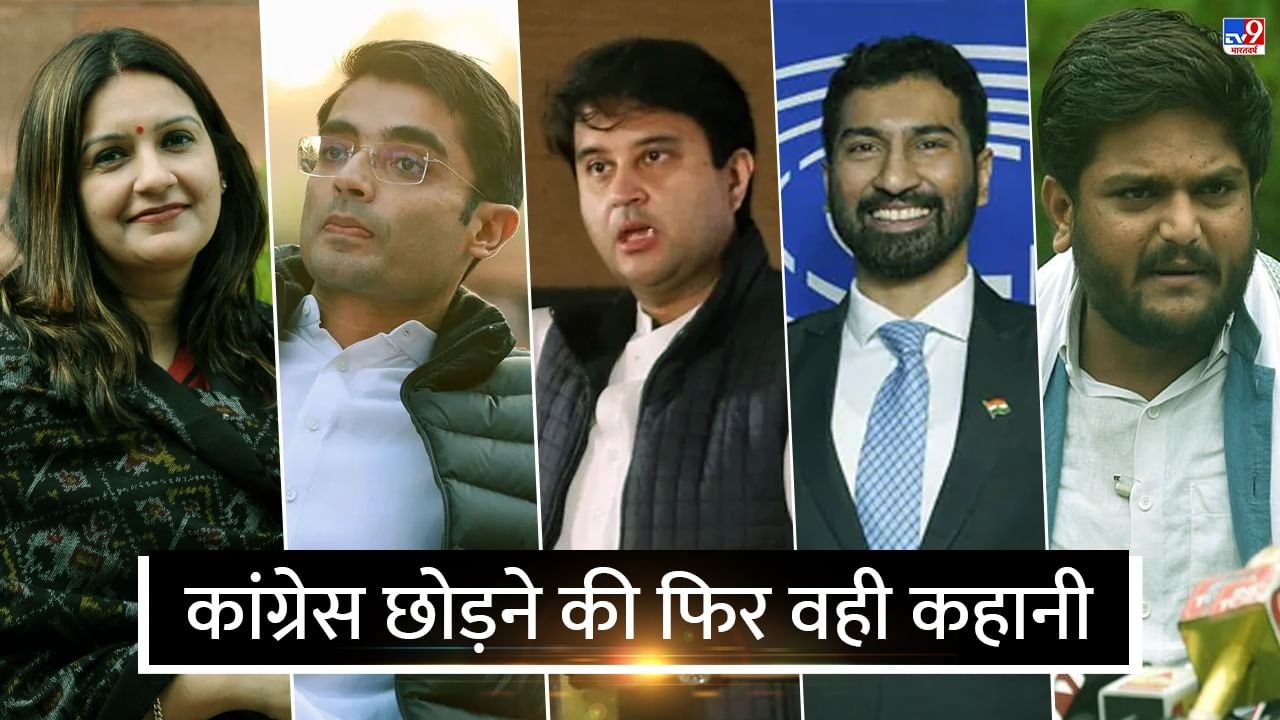 From Jyotiraditya Scindia to Jaiveer Shergill, Hardik Patel, Sushmita Deb, Alpesh Thakor, Jitin Prasad… there are many names whose presence would have strengthened the youth brigade of Congress!

Another young leader left the Congress. Anil K Antony, son of former Defense Minister AK Antony. The same Anil, who took charge of the war room for Rahul Gandhi in Wayanad and played a big role in his victory. And this is not a first, second or third name. The list of young leaders who have left the party in recent years is very long.

Rahul Gandhi, who came out to unite India, who is called the youth leader of Congress, is not able to stop even his youth brigade. Anil’s Antony was the ‘hero’ of his victory in Wayanad. From Jyotiraditya Scindia who was once his staunch companion to Jaiveer Shergill, Hardik Patel, Sushmita Deb, Alpesh Thakor, Jitin Prasad… there are many names whose presence would have strengthened the youth brigade of Congress! But one by one everyone left the Congress.

What was the reason after all? Anil Antony has clearly said in his resignation that Congress has remained a party of sycophants and sycophants. Apart from him, many other leaders have made such allegations.

1). Scindia left after not getting leadership

Jyotiraditya Scindia left the party in March 2020 after supporting the Congress for 18 years. He joined BJP along with his supporters. Got the reward that he was sent to the Rajya Sabha and became a Union Minister in the BJP government. He had resigned regarding the leadership in Madhya Pradesh. 20 MLAs were with him and Kamal Nath’s government fell.

The reason was the same. Not being made the president of Madhya Pradesh Congress, the uncertainty regarding the Rajya Sabha seat was cited as the reason. It was said that he is not listened to in the party. He also expressed displeasure over the party not fulfilling its election promises.

Congress youth spokesperson and lawyer Jaiveer Shergill also left the party in August last year. Then in a letter to Congress President Sonia Gandhi, he had written such things, which were bitter for the Congress. He had said, “I have decided to break all ties with the grand old party because sycophancy is eating up the organization like termites. I cannot do this work.

Taking a dig at the party leadership, he also accused them of ignoring the ground reality. He wrote, “It pains me to say that the decision making is no longer in the interest of the public and the country, but is influenced by the selfishness of those who indulge in sycophancy and are constantly ignoring the ground reality . This is something I cannot morally accept or continue to work with.”

3.) Hardik Patel was sad about this

Patel, who came into limelight in the year 2015 with the Patidar movement, joined the Congress in 2019. The party made him the state president. However, could not do anything special in the 2019 elections. He left the party in 2022. Regarding his displeasure, he said that the party has made him the working president for two years, no responsibility was given to him. Giving position is not a big deal, there should be utilization. That didn’t happen, it’s just the pain of this.

4). Priyanka was angry for not progressing

Congress’s firebrand spokesperson Priyanka Chaturvedi had resigned from the Congress before the 2019 general elections. A few days before his resignation, he was misbehaved with by local leaders in Mathura. The party suspended eight leaders. But with strict instructions, all of them returned to the party. She was very sad because of this. One of the reasons for Priyanka’s displeasure was that she was not getting proper attention in the party.

Priyanka had thought of contesting from the Mumbai North seat in the general election, but the party had given ticket to film actress Urmila Matondkar. After joining the Shiv Sena, he had said, “I had hoped that the party would take me to the next level, but it did not happen.”

Congress leader Anil K Antony has resigned a day after supporting the government over the protest against the BBC documentary on the 2002 riots. Former Defense Minister AK Antony’s son said that he was constantly being pressurized to withdraw the tweet made in support of the government.

On Wednesday, he announced his resignation from all Congress posts by tweeting and also wrote that the Congress leadership likes only sycophants and chamchas. that work without question. I have come to know this. He further wrote, “I believe that I have some unique strengths, which have given me the opportunity to make different contributions to the party.” He also thanked Shashi Tharoor.