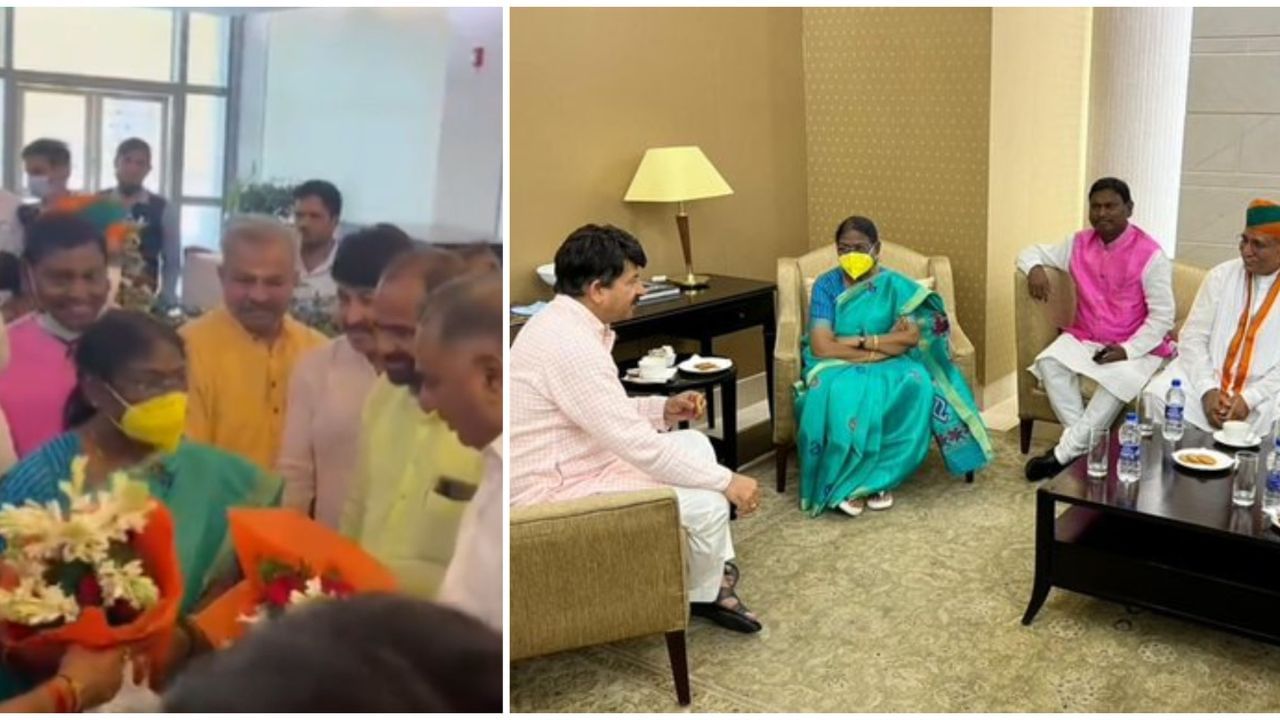 National Democratic Alliance (NDA) ie NDA’s presidential candidate Draupadi Murmu (NDA Presidential Candidate Droopadi Murmu) has reached Delhi on Thursday. She will file her nomination tomorrow i.e. on June 24. Union Ministers Arjun Munda, Arjun Ram Meghwal and Dr. Virendra Kumar and BJP (BJP) Leader Manoj Tiwari has met Draupadi Murmu at the Delhi airport. Shortly before this, while appealing to her support, she said that she would meet all the voters before July 18 and seek their support. Voting for the presidential election is to be held on July 18. draupadi murmu

Murmu had left for Delhi by plane from Biju Patnaik International Airport in Bhubaneswar at 9.40 am. A tribal dance was organized there, a large number of his friends and well-wishers gathered at the airport to see him off. She reached the Odisha capital on Wednesday night by road from her native city Rairangpur in Mayurbhanj district. During this, people greeted him on a 280 km long route and wished him well.

Draupadi Murmu received a warm welcome on arrival in Delhi

#WATCH , NDA’s Presidential candidate Droupadi Murmu arrived in Delhi ahead of the filing of her nomination tomorrow, 24th June. She was received by BJP leaders at the airport. pic.twitter.com/2SUK6CbuM0

Mother-daughter going to serve the country

In a brief statement before leaving for the national capital, Murmu said, “I thank everyone and seek cooperation from everyone for the presidential election.” I will meet all the voters (MPs) before July 18 and seek their support. At the airport, his only daughter Itishree Murmu said, “The people of the country like my mother for her simplicity and soft spoken nature. She is going to serve the country by handing over the responsibilities of the family to me. Itishree Murmu is an officer in a bank in Bhubaneswar and is currently on maternity leave to look after her two-month-old daughter.

NDA’s presidential candidate Draupadi Murmu was also scheduled to visit her school Unit-2 Girls’ High School in Bhubaneswar on Wednesday, but she canceled the event due to the crowd. Some teachers from Murmu’s school and college came to the guest house and met him. His school’s head teacher Kalyani Mishra said, it is a matter of pride for us that our alumnus is going to become the next President of India. Former Jharkhand Governor Murmu did her graduation from Rama Devi Women’s College, which is now a university. Murmu had also worked in the Irrigation Department of Odisha after completing his graduation.

The history of income tax slabs in the country is no less unique. A shocking…

Digital India: OpenForge has been formed by the government to create innovative e-governance applications. Through…

The Australian team will have a tough test this time on Indian soil. But, this…

Budget 2023: There are many expectations of changes in the rules ranging from job profession…