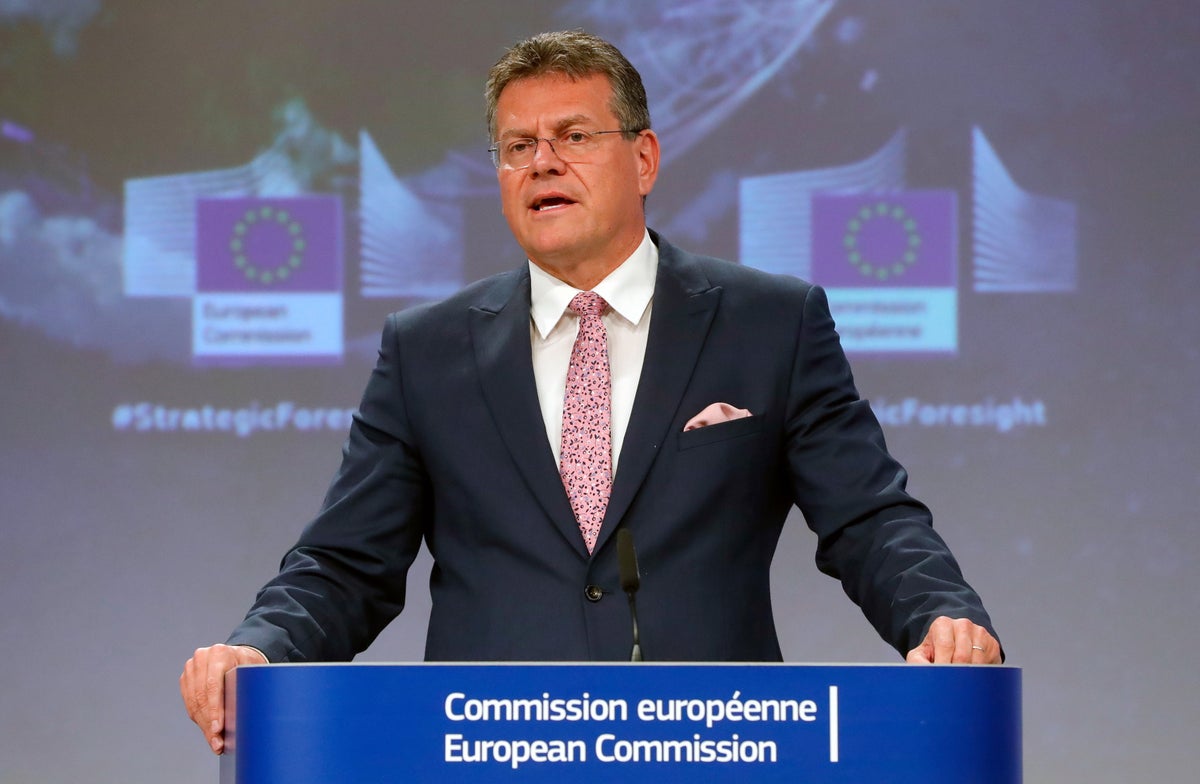 The EU has issued a plea to the UK to “come back to the table” to unravel the disaster over Northern Ireland, because it set out the large financial injury from Brexit.

In a speech in London, the vice-president of the European Commission joked that it’s now Brussels that desires to get “Brexit done” – whereas London has refused face-to-face talks for 4 months.

Maros Sefcovic referred to as for a contemporary push to search out “genuine joint solutions” to the battle over the Northern Ireland Protocol, telling the occasion: “We are absolutely ready. Let’s come back to the table.”

It would permit the 2 sides to “move to the next, I hope, brighter stage of our working relationship”, he argued – calling the UK and the EU “natural allies”.

But the chief Brexit negotiator insisted the EU won’t again down in combating the UK’s “unilateral and illegal” Bill to tear up the Protocol, which has sparked renewed authorized motion.

And he warned of “consequences” if the federal government pursues hints it’s going to “slash EU regulation” in monetary companies, information and meals requirements, regardless of guarantees made when the Brexit deal was signed.

“An end to mutual recognition is a possibility if the UK changes its standards. We will therefore be watching developments closely,” Mr Sefcovic advised the occasion hosted by the Bloomberg information company.

He set out, in stark phrases the rising proof of financial hurt from Brexit, together with a 25 per cent plunge in UK good exports to the EU since 2019 and a seven per cent fall in companies commerce.

“In times of economic strain, this hurts businesses on both sides of the channel,” Mr Sefcovic warned.

He condemned the Protocol Bill – which cleared its first Commons hurdle this week – warning it might “lead to constant uncertainty”.

“Put simply: it would not work. Ministers in London would have the freedom to change the rules on a whim,” Mr Sefcovic stated.

“A dual regulatory regime, where businesses opt for EU or UK regulations, would bury them under a mountain of bureaucracy.

“This would clearly be a lose-lose situation – for EU-UK relations and, first and foremost, for Northern Ireland.”

He opened his speech by referring to a speech made by then-prime minister David Cameron at Bloomberg in 2013, which set the UK on its the trail to the 2016 Brexit referendum.

“I hope we are close to reaching the end of this particular cycle. You may not hear this often from a European Commissioner, but it is high time we got Brexit done,” he stated.

But Mr Sefcovic refused to say what kind additional EU retaliation may take if the Protocol laws turns into regulation – which isn’t anticipated to occur till subsequent yr, on the earliest.