Election 2022: Even after the assembly elections, Delhi is full of posters, voters of these states dominate more than 50 assembly seats. 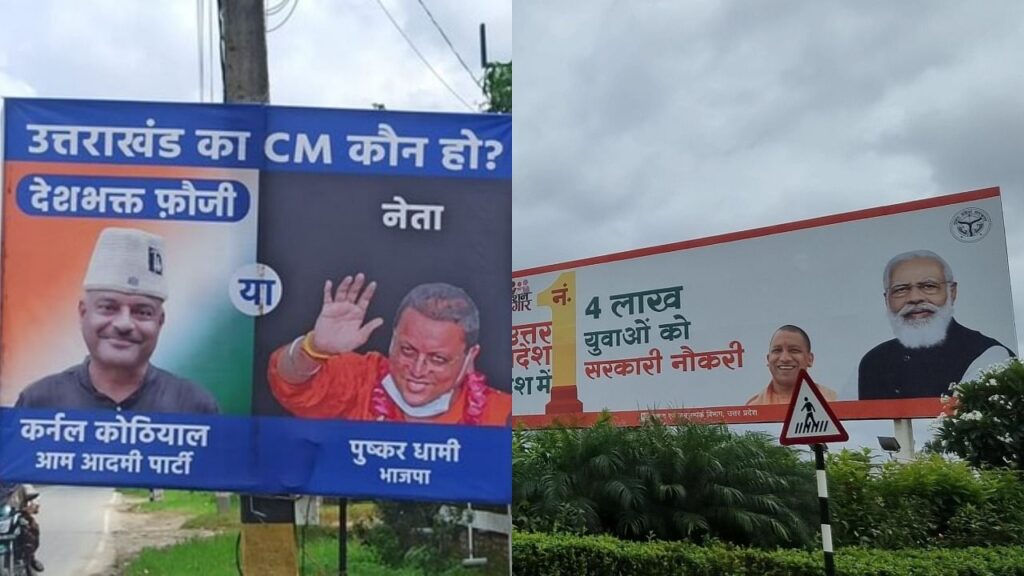 More than half of Delhi’s assembly seats are dominated by migrants from other states. This is the reason why the governments of the respective states are campaigning for the elections by putting up their posters.

Delhi is not included in 5 electoral states. But in the election season, Delhi is also littered with posters.

Assembly elections are going to be held very soon in five states of the country. However, Delhi is not included in the electoral states. But in the election season, Delhi is also littered with posters. There are a lot of posters in every corner of Delhi. Posters of UP CM Yogi Adityanath, Punjab CM Charanjit Singh Channi and Uttarakhand CM Pushkar Singh Dhami are being seen everywhere. The governments of the states where elections are going to be held, the governments have remained untouched. In the hope of electoral gains, Delhi has also been filled with posters.

Assembly elections (Election 2022) are going to be held soon in Uttarakhand, Uttar Pradesh, Punjab, Goa and Manipur. Out of these five states, 3 states have got posters pasted in the capital Delhi in the governments of UP, Punjab and Uttarakhand. In these posters, the government is describing its plans and the work done by the governments. Let us tell you that there are a total of 70 Vidhan Sabhas in Delhi. Most of the people here are residents of UP, Bihar, Uttarakhand, Himachal Pradesh, Punjab, Haryana. In such a situation, whenever elections are held in all these states, there is an effort by the governments and political parties to attract the attention of these migrant Delhiites in some way or the other.

The dominance of migrants from these states in Delhi

People from states like UP, Uttarakhand, Punjab, Haryana and Himachal live in large numbers in Delhi. Very soon elections are going to be held in Uttarakhand, UP and Punjab. Perhaps this is the reason why the streets of Delhi are littered with posters of the governments of these states. Let us inform that out of 70 assembly seats in Delhi, 27 seats are dominated by Purvanchali people. Perhaps that is why the Yogi government is trying to garner the support of the Purvanchalis by putting up posters in Delhi.

The number of Punjabi voters is very high in 13 seats of Delhi, Vikaspuri, Rajouri Garden, Hari Nagar, Tilak Nagar, Janakpuri, Moti Nagar, Rajendra Nagar, Greater Kailash, Jangpura, Gandhi Nagar, Model Town, Laxmi Nagar, Rohini. That is why the Channi government is trying to woo Punjabis by putting up posters here. The number of hill migrants in Delhi is around 30 lakhs. This is the reason why BJP does not want to let go of this bet by continuing the posters of CM Dhami to woo the voters. More than half of Delhi’s assembly seats are dominated by migrants from other states. This is the reason why the governments of the respective states are campaigning for the elections by putting up their posters.

Also read- UP Assembly Elections: How effective is the politics of BJP with 60 percent votes on the ground in Uttar Pradesh