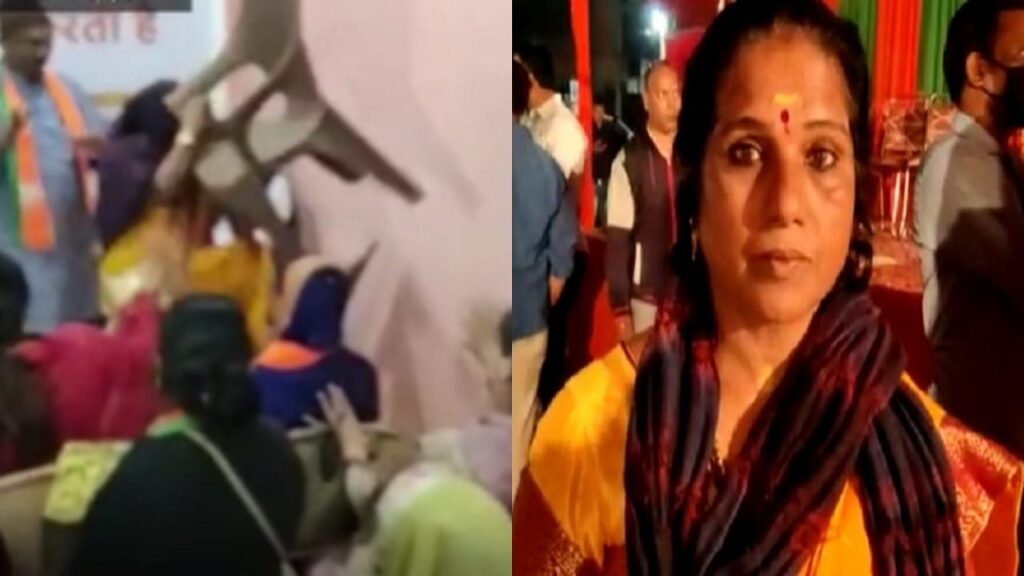 A woman leader created a ruckus at the inauguration program of the BJP’s electoral office for the urban body elections in Bhilai.

BJP may have to face trouble in the urban body elections in Bhilai, Chhattisgarh. As the election date approaches, the party has started fighting over ticket distribution. For the municipal elections, BJP had organized the inauguration of the election office. Then suddenly a woman BJP leader reached there and asked the senior leaders where their ticket was. She was shouting and asking where was her ticket. None of the leaders present there answered him. After which the female BJP leader broke the chair in anger.

The election office of BJP was inaugurated today at Supela Gada Chowk. After the inauguration of the office, all the senior BJP leaders were sitting and discussing among themselves about the elections. During this, many big leaders including BJP MLA from Vaishali Nagar Vidyaratan Bhasin, Rajnandgaon MP Santosh Pandey, election in-charge Bhupendra Singh Savanni were present there. During this, BJP leader Suman Unni reached there. She started barking loudly. He shouted and asked where is my ticket distribution. He broke the chair in anger until someone told him anything. The video of this incident has also surfaced.

‘Dummy candidate made after cutting ticket’

Suman Unni says that she is a contender for ticket from Ward 65. But BJP did not give him a ticket. He alleged that the same thing happened to him in the last election as well. He had earlier also complained about this to senior leaders. Yet this time his ticket was cut. Suman Unni says that she has been working for BJP for 21 years. She said that she cannot leave Modi ji, that is why she is fighting for her rights, she was earlier told to give a ticket, but later her ticket was cut.

Working for BJP since 21 years

Suman Unni alleges that BJP has given ticket to dummy candidate Rita Yadav to make Congress candidate Subhadra Singh win. He alleged that the candidate to whom the ticket has been given is not a member of BJP. He claimed that the candidate did not do any work for the party even once in 5 years. Suman alleged that she was given the ticket on the behest of former minister Prem Prakash Pandey’s special date Khan. He said that in the last election of Tithi Khan, he defeated BJP by fighting as an independent. Now at his behest, a dummy candidate has been given a ticket. He asked where should he go now.

Also read- CM of Chhattisgarh took a jibe at Mamta, said – fighting with the opposition or with the Modi government