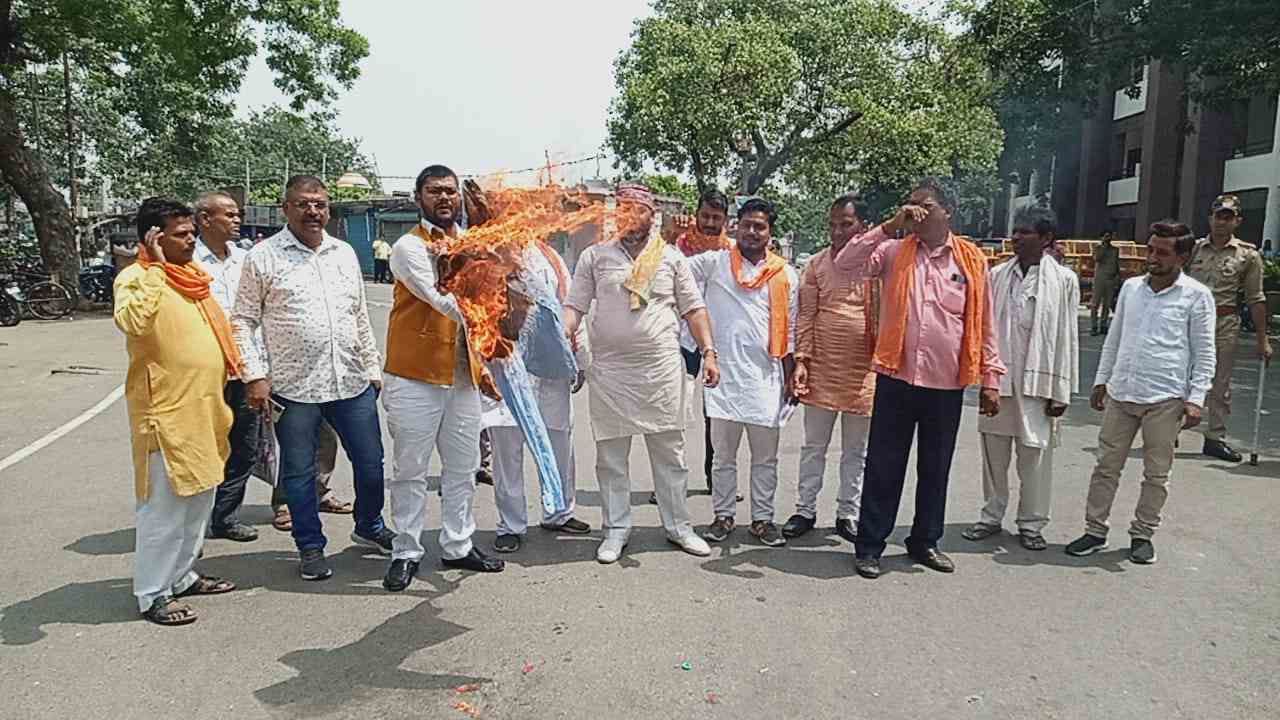 Azamgarh remained a stronghold of the Samajwadi Party (AzamgarhOn Friday, BJP workers burnt the effigy of SP National President Akhilesh Yadav. It is being told that in Ayodhya, controversial and indecent remarks were allegedly made by Akhilesh Yadav on deities. Due to which there was anger among the hurt BJP leaders. On Friday, leaders protested by burning an effigy of Akhilesh Yadav at the District Magistrate’s office. Along with this, demanded to register a case against Akhilesh Yadav.

Protesting by burning the effigy, BJP leaders submitted the relevant memorandum to the district administration. During this, BJP’s District Vice President Harivansh Mishra said that the way former Chief Minister Akhilesh Yadav has given a controversial statement against Hindu deities in Ayodhya. Due to which the Hindu public has been hurt a lot. That’s why the effigy of the former CM has been burnt.

He also said that Akhilesh’s father Mulayam Singh Yadav fired at the kar sevaks and today his son Akhilesh Yadav has given a controversial statement on our deities from the land of Lord Ram. Due to which their religion has also started to be doubted. They demanded that a case be registered against the former Chief Minister.

So BJP angry on this statement of Akhilesh

In fact, on the last day i.e. on May 20, SP President Akhilesh Yadav had given a controversial statement regarding the Gyanvapi survey in Ayodhya. He had said that in our Hindu religion, place a stone anywhere, put a red flag, a temple was built under the Peepal tree. Akhilesh remembered the Babri Masjid in gestures and said that there was a time when idols were kept in the dark of night. This bulldozer is only to scare religion, caste and our Muslim brothers. Action is not for the big guys.

Dimple will be in the fray in Azamgarh Lok Sabha seat by-election!

The Lok Sabha elections are in the year 2024 and the assembly elections in the year 2027. In this the minority vote bank will be most important. Akhilesh is going to have a big exam in the next few months. That test is the Lok Sabha by-elections in Azamgarh and Rampur. Akhilesh Yadav was the MP from Azamgarh. At the same time, Azam Khan from Rampur. Both left their MPs after the result of the 2022 UP elections. Now if there is a split of minority vote bank in the by-election.

On the other hand, by-election is to be held on Azamgarh Lok Sabha seat. So far the name of any candidate has not been announced by the SP. There is a discussion that the SP President can field his wife Dimple Yadav on this seat. Azamgarh is considered a stronghold of the Samajwadi Party and in the assembly elections, the party won all the seats here.