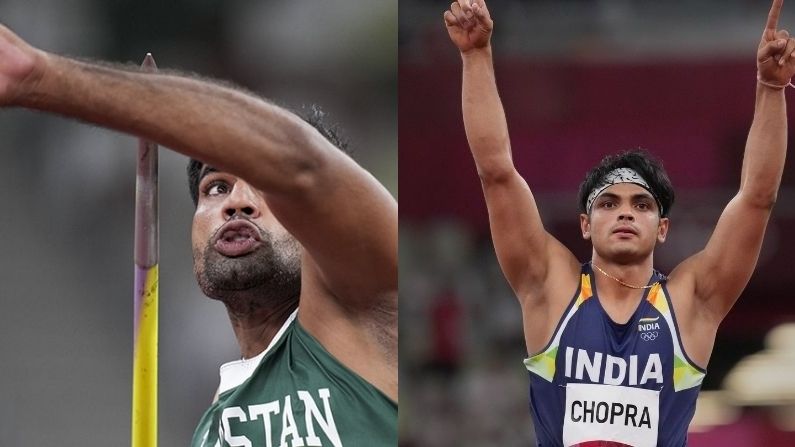 Everyone was eagerly waiting for this match between India and Pakistan in the Tokyo Olympics and when the result came, the people of India started dancing.

Arshad Nadeem could not overtake Neeraj Chopra in Tokyo Olympics-2020

Saturday was a very important day for India in the Tokyo Olympics-2020 as one of India’s biggest medal hopes was javelin thrower Neeraj Chopra in the finals. Gold medal was expected from Neeraj and he performed according to the expectations and gave the country a historic gold medal. Neeraj, performing one sided, created history by winning the gold medal. This is India’s first medal in athletics. Apart from this, this is India’s second gold medal in singles event at the Olympic Games. Before Neeraj, male shooter Abhinav Bindra won a gold medal in the singles event at the Beijing Olympics-2008. After him, now Neeraj has achieved this feat. After his victory, everyone is congratulating him and there is also Arshad Nadeem, a Pakistani player who considers his ideal. Nadeem also played in the final and finished fifth.

Nadeem was not even around Neeraj

Nadeem finished third overall in the qualification and hence was expected to give a tough fight to Neeraj, but he could not even come close to Neeraj’s performance in the final. Once Neeraj crossed the 87m mark in his second attempt, since then Nadeem could not even throw a throw closer to him and Neeraj shooed him away in a single attempt.

An interesting thing in this match was that Neeraj is the inspiration of Nadeem. Seeing the Indian player, he decided to become a javelin thrower. Nadeem of Pakistan used to play cricket earlier, but he decided to leave this game and try his hand in athletics. Nadeem had said after winning the bronze medal in the 2018 Asian Games that he had decided to play javelin throw only after seeing Neeraj.

Tokyo Olympics 2020: To lose weight was kept on the field, now the coin runs in the world, the name is Neeraj Chopra

Before investing money in mutual funds, know what is Alpha and Beta, otherwise there will be loss

Bollywood’s King Shah Rukh Khan is enjoying the success of his film Pathan these days.…