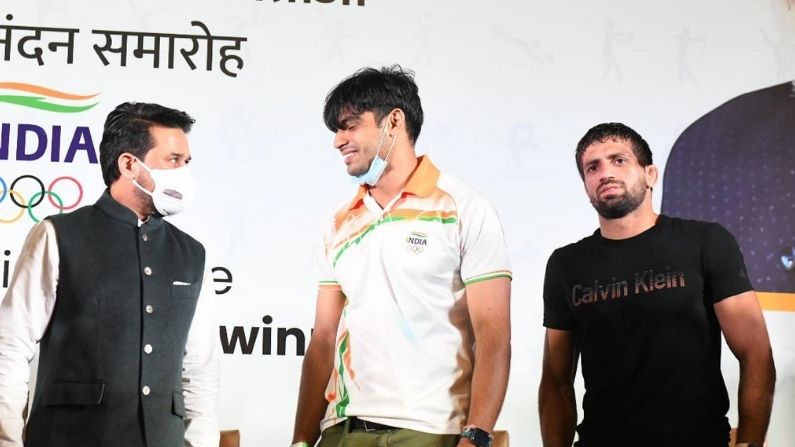 Neeraj Chopra is the second Indian player to win a gold medal in the Olympic Games.

The medal winners of India’s Tokyo Olympics 2020 were welcomed in a grand manner by the government at the award ceremony in Delhi on Monday. In this, Sports Minister Anurag Thakur said that the journey of these players has been an ‘unbelievable story of sports excellence and passion’. On this occasion, gold medalist Neeraj Chopra said that this medal belongs to the whole country. Ever since he won it, he has been carrying it around in his pocket. All eyes were on Neeraj Chopra, the country’s first player to win a gold medal in athletics at a ceremony held in a five-star hotel. In the honor ceremony, the Sports Minister presented him a memento and a shawl. The bronze-winning men’s hockey team and the fourth-placed women’s team both celebrated by cutting a cake after reaching the hotel. While Chopra shone golden in the Indian campaign, lifter Mirabai Chanu and wrestler Ravi Kumar Dahiya won silver medals. Apart from the men’s hockey team, boxer Lovlina Borgohain, shuttler PV Sindhu and wrestler Bajrang Punia won bronze medals.

Lovlina said, ‘I am very happy to be back home. I knew people in India would be very happy but it feels great to be getting so much love for the first time after coming back here. I will try to do my best for more such medals. Sindhu and Chanu did not attend the ceremony as they had already reached India and a ceremony was held in her honour. Bajrang said, ‘I only tried to give my best.’ Union Law and Justice Minister Kiren Rijiju, Minister of State for Sports Nisith Pramanik, Secretary (Sports) Ravi Mittal and Director General of Sports Authority of India Sandeep Pradhan were also present at the function.

Many amazing things happened in Olympics for India

Anurag Thakur said, ‘Many such things happened for India in Tokyo 2020 which happened for the first time in the Olympics. The success of ‘Team India’ in the Olympics reflects how the new India aspires and aspire to dominate the world, even in sports. The Olympic Games showed us that with self-discipline and dedication, we can become champions. Team India inspired by the excellent performance, while the people of India rejoiced and celebrated the success.

Many things happened for the first time in India’s campaign, including the largest ever 128-man contingent, seven Olympic medals, the first Olympic gold medal in an athletics event, medals by Sindhu in consecutive Games (Rio and Kyo) and Indian men’s hockey. Including the team winning a medal (bronze) after 41 years. With this, the women’s hockey team achieved its best fourth position in the games. “We will continue to support our players and we will try to make India a sports superpower,” Thakur said.

The Sports Minister also praised golfer Aditi Ashok for finishing fourth. Thakur’s predecessor Rijiju praised the performance of all the players and reiterated that India will become a force to be reckoned with by the 2028 Olympics.

During the award ceremony, when Bajrang Punia was asked about his injury, he said that he was wearing a kneecap due to a knee injury when he was playing for the final. But the opposing player targeted the same thing. But when there was a bronze medal match, I thought that even if the knee is broken, it does not matter, but will try our best. For this reason, he did not wear a kneecap in the bronze medal match.