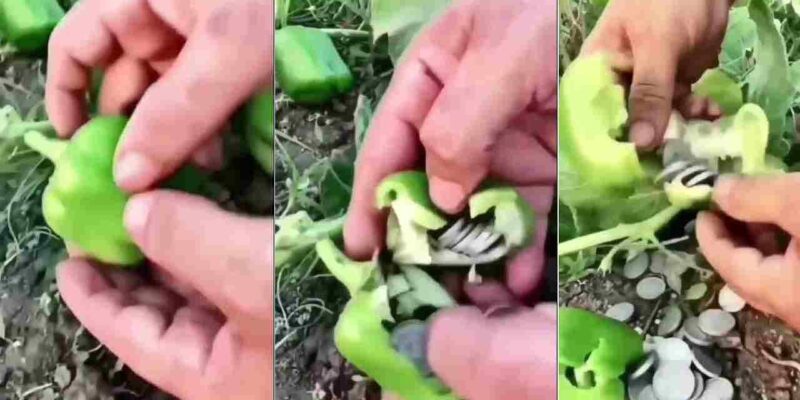 See strange coins in the video

Weird videos are often seen on social media. Some videos are also surprising. Now a video has come out in this sequence, seeing which all of you will be surprised. Along with this, many questions will also arise in your heart. All of you must have seen many types of vegetables in the fields. There are also some vegetables that you must eat often, but have you ever heard or seen that after cutting a vegetable, coins are coming out of it? Yes! This is true, the proof of which you can see in the video.

The video that has surfaced on social media is of capsicum. We are sure that you will be blown away seeing this strange capsicum. Let us tell you that after cutting this capsicum, coins are coming out of it. It can be seen in the video that a man is seen in the field. Where many capsicum are planted. As soon as that person cuts this chili pepper into two halves, then not one but many coins fall from inside him. This is not only seen in one capsicum but in many capsicums.

This video is now surprising everyone. People are also sharing their reaction after seeing the strange capsicum. While one user wrote while commenting, ‘It seems this person has put coins in this capsicum’, while another user wrote, ‘Maybe this person wanted popularity so he did it’ The third user wrote, ‘ This video is very strange’ Another wrote, ‘I have never seen such a video before’ Apart from this, most users are giving their reaction by sharing emoticons.

Let us tell you that this video has been shared on the social media platform Instagram account. The video is being seen on the page of filmflix3. With this, this video is being shared on other social media platforms. In the video, this person is also looking very upset and shocked and we can guess. There will be many questions in this person’s mind too.