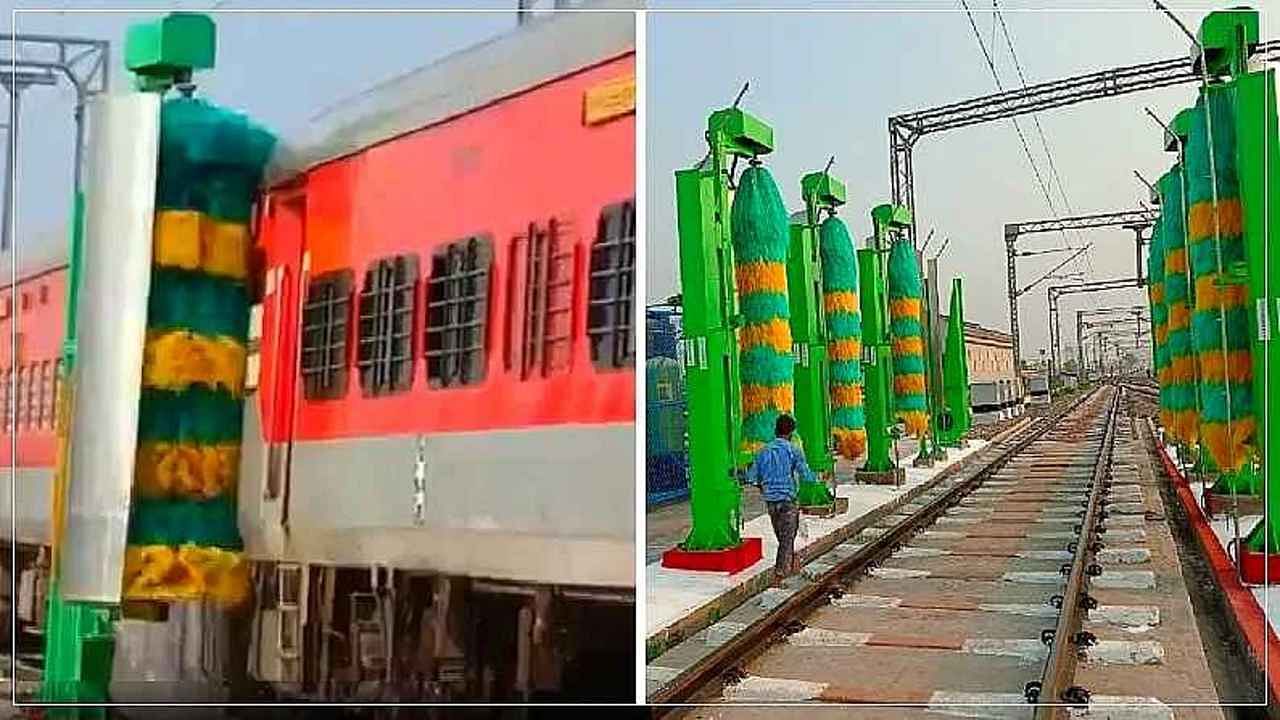 Train Coaches Washing Plant: Trains will pass at a speed of 5 kmph inside the coach washing plant and the exterior of the train will be completely washed step by step.

Train Coaches Automatic Washing Plant: The cleanliness of trains is of great importance for the railway passengers. No matter how many royal trains, if they look dirty you won’t feel like boarding it! Train running on the rail track day and night, morning and evening covers a distance of thousands of kilometers and in such a situation, it is natural for the trains to be dirty, bearing dust, dirt etc.

Red, blue and colored bogies of trains carrying dirt become quite dirty. It also takes time, effort, a lot of water and manpower to clean them. Railways has taken a break to save these four. The Ministry of Railways has given information about this new washing system by tweeting, which has been installed at KSR Bengaluru Station.

In fact, the Railways has started such a state-of-the-art automatic coach washing plant, through which the cleaning of a 24-coach train is being done in just 7 to 8 minutes. It will take less than 5 minutes to clean 15-16 bogie trains. It neither requires manpower, nor much time nor effort. This plant has been installed at KSR Bangalore station, about which the Ministry of Railways has given information by tweeting.

Watch in the video- how cleaning is being done

In this plant, more and more coaches are being cleaned in a short time. Along with this, it is also proving helpful in saving water. The great feature of this system is that 80 percent of the water used for cleaning work is being reused. 80 percent of the water is being recycled and made usable again. According to an estimate, about 2000 liters of water is wasted in manually washing the exterior of the train. With the installation of coach washing plant, this waste will stop.

Washing plant has also been set up in Saharsa, Bihar

An automatic coach washing plant has also been started at Saharsa station under Samastipur railway division of Bihar, where the exterior of the train is being washed and cleaned in just five minutes. According to the information received, a cost of about 1.60 crores has been incurred in this project of Railways. Project Incharge Sanjeev Kumar NewsNCR No. Was told that only 40 feet long and 6 feet wide space on the track has been used in the Coach Washing Plant at Saharsa, which was built with Rs 1 crore 60 lakh. At the same time, there is a water tank in only 5 feet wide and 25 feet long. All the outer coaches of the trains are being washed at less space and less cost. The trains will pass at a speed of 5 kmph inside the coach washing plant and the exterior of the train will be completely washed step by step.

According to a railway official, the length of a coach of a train is 23 meters. If we talk about 24 coaches of the train, then the total length will be 552 meters. If this train passes inside the coach washing plant at a speed of 5 kmph, then the exterior of the train will be completely washed in just 6 to 7 minutes.

Also read: Will Solar Panels Be Installed On The Roof Of The House? Electricity will be available for free! know how much it will cost

Postponement of IPL was beneficial for Mumbai Indians, Gautam Gambhir explained the reason