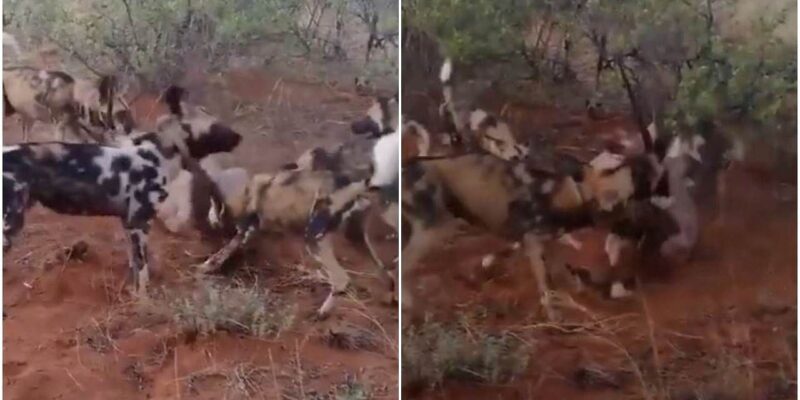 Wild dogs made deer their prey

Nothing can be said about when what will happen in the world of the jungle. Here both the hunter and the hunter have to keep their ears open, otherwise death can knock at your door at any time. It is often said that the real value of life is known only to the person whom death has touched. This applies to humans as well as animals.

At the very beginning of the video, the wild dogs take hold of the deer, after which the deer is suffering badly and is screaming loudly. But he competes well with them with his big horns. The dogs are afraid that the deer might attack them with their horns. That is why the dogs are trying to eat the deer with great care. At the same time, the deer repeatedly tries to drive away the dogs by twitching its neck, but the dogs catch it again after leaving like every time.

At the end of the video, all the hard work of the deer is answered, the dogs have eaten his body and grabs his intestines and drags him away and he is unable to save his life and the dogs kill him and eat him.

Also read: Tiktok wife ate her husband’s pet fish after applying turmeric and chilli, got angry with one thing

Also read: The purse was lost 51 years ago, when the police returned the person, he was shocked to see the things inside

Also read: The dog bravely faced the giant snake, you will be surprised to know the result; Watch Video

Skin Care: To bring natural glow in the skin, use tomatoes like this, get healthy glowing skin

Pakistan’s team is also battered in front of Chennai Super Kings, victory in the first qualifier of IPL 2021 has a big impact