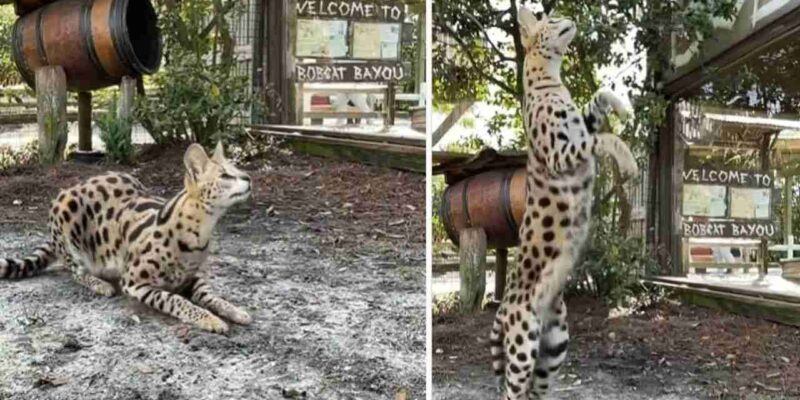 A strange video is going viral on the internet, in which a wild cat is seen catching the ball like a player. Many people are surprised to see the video.

All of you must have seen videos of many football matches or cricket matches going viral. There are some such scenes of these matches which are viral, like a player caught a great catch or a player was seen swirling the ball on his finger. But let us tell you all that the video which is going viral now is very strange. In this video, the character of the player is playing a wild cat. Yes, you must have been surprised to know this, but it is true. You can see the proof of this in the video going viral.

A wild cat can be seen sitting comfortably in the video. Then someone from the other side throws a ball towards that cat. Seeing the ball coming to him, the wild cat jumps very high like a player and catches the ball with his mouth. This strange video is interesting as well as surprising. People who have this question in their mind that after all the cat catches the ball? So you can see in this video.

The video has been shared on Instagram on a page named Nature. Sharing the video, the caption read, ‘Great jump! Serval cats are very strong and fast. These cats have an incredible ability to jump. These cats can jump high to catch the birds flying in the air.

The caption further read, ‘Servals (wild cat native to Africa) are medium sized wild cats. They have dark spotted coat, long neck and long legs. Which allows them to see on the savanna grass. It is a wild cat native to Africa. It is rare in North Africa and the Sahel, but is widespread in sub-Saharan countries, except in the rainforest region. Across its range, it occurs in protected areas, and hunting is either prohibited.

Many people are also sharing their reactions on this video. One user wrote, ‘Such a cat has been seen for the first time’ Another user wrote, ‘Today agreed that a cat also has a lot of talent’ Apart from this, most people have shared the shocking emoji.

Also read: The simplicity of the elderly woman won the hearts of the people, people said – ‘Make them viral too’