Why is the thread with 14 knots worn on Anant Chaturdashi, know the method and rules of wearing it 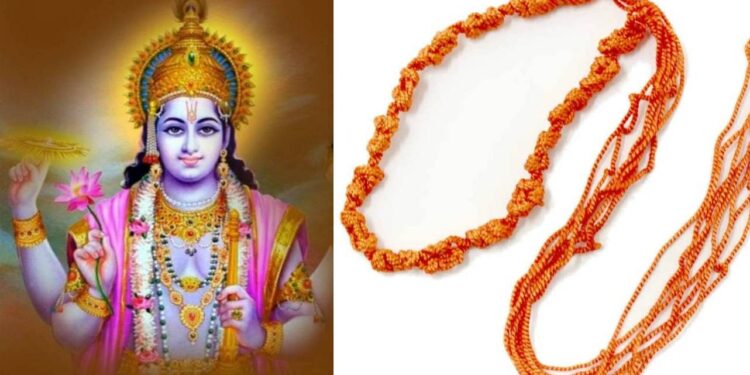 On the day of Anant Chaturdashi, there is a law to worship the infinite form of Shri Hari and observe fast. On this day, a sacred thread with 14 knots is specially offered in the worship of Lord Vishnu. Read this article to know the importance, method and rules of holding this infinite formula.

Significance of Ananta Sutra with 14 knots

On the day of Anant Chaturdashi, the worship of Anant Sutra with 14 knots has special significance in the worship of Lord Vishnu. It is believed that this sacred thread with 14 knots is a symbol of the 14 worlds made by Lord Vishnu, which by tying it in the form of Prasad in the arm, there is no fear of any kind of fear or obstacle in life. Lord Vishnu protects his seeker in every way.

On the day of Anant Chaturdashi, after bathing and meditation, Lord Vishnu is worshiped according to the law and the story of Anant Chaturdashi is recited. After this, after dyeing a cotton thread with kumkum, turmeric and saffron, 14 sacred knots are prepared in it. Anantha is prepared and dedicated to Lord Vishnu by reciting the mantra “Achyutaya Namah Anantaya Namah Govindaya Namah” and after that the form of Prasad is worn in his right arm. This infinite sutra is supposed to protect from all kinds of evil forces and enemies.

On the day of Anant Chaturdashi, after wearing the Anant Sutra, which is considered to be the prasad of Lord Vishnu, it is taken off during the night and on the second day it is immersed in a holy river or lake. If this action is not possible on that day, then the person has to wear that Ananta for the next 14 days. If even after 14 days he is not able to perform this kriya, then he has to wear it for the whole year and keep it tied till the next Anant Chaturdashi.