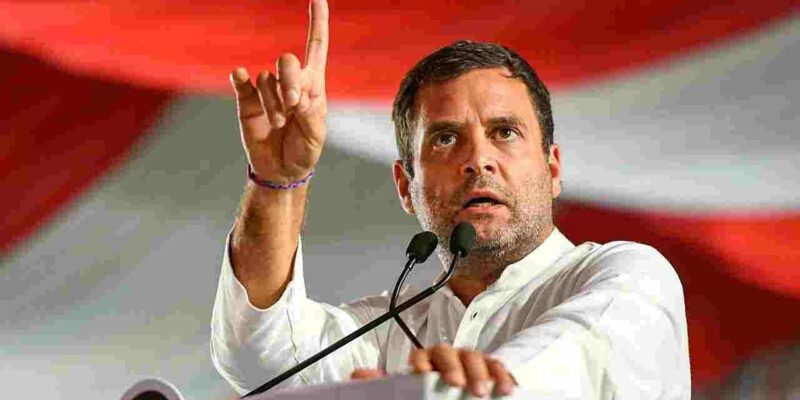 Not only this, the Bharatiya Janata Party (BJP) calls Rahul Gandhi the crown prince of the Congress party. He is the heir of a big family. Father Rajiv Gandhi, grandmother Indira Gandhi and great-grandfather Jawaharlal Nehru have been the Prime Ministers of the country. Rahul Gandhi was brought up like a prince and he is still made to feel that he was born to rule the country. In the old days, when the king was happy, he used to open his treasury. Although in the 2019 general elections, Rahul Gandhi had declared his own assets of 16 crores and annual income of 1 crores, but his wealth is believed to be many times more than this. That is, Rahul Gandhi is rich. The treasury of the Congress party is empty and he refrained from spending his own money to do politics, but yesterday he opened the treasury of two Congress ruled states for the promotion of himself and the party.

Rahul Gandhi reached Lucknow, the capital of Uttar Pradesh yesterday. He was accompanied by his two warlords, K.C. Venugopal and Randeep Singh Surjewala were accompanied by Chhattisgarh Chief Minister Bhupesh Baghel and Punjab’s newly appointed Chief Minister Charanjit Singh Channi. The Chief Minister of the third Congress-ruled state of Rajasthan, Ashok Gehlot could not be there because Rahul Gandhi and Gehlot do not get along. Venugopal and Surjewala are the party’s national general secretaries only because both are considered close to Rahul Gandhi.

Rahul Gandhi wants to be ahead of BJP in compensation?

Is the cost of security forces personnel less in the eyes of Rahul Gandhi?

It is noteworthy that when the security forces personnel are killed by the Naxalites, the Chhattisgarh government gives a compensation of Rs 20 lakh to their family, while the Punjab government gives a compensation of Rs 10 lakh to the family of the security personnel. The question is why in the eyes of Rahul Gandhi, why the security personnel’s life is worth so much less than the agitating farmers of Lakhimpur Kheri, is it because the security personnel are deployed for the security of the country or the state and very few of them are able to vote? That is, the cost of life is less for the one who is not a voter, less for the one who died for the country and more for the farmer who defies the law and orders of the Supreme Court by blocking the road. This is probably called Andher Nagari Chaupat Raja!

Has anyone ever heard that if a security personnel of any other state sacrifices his life in the service of the country, then the government of Chhattisgarh or Punjab gives compensation to his family? This simply means that Rahul Gandhi’s eyes are only on the Prime Minister’s chair, his dream of winning the 2024 elections will come true only if the farmers of the country vote for the Congress party. Without Rahul Gandhi’s sympathy with the deceased farmers of Lakhimpur Kheri, he went there to do vote politics.

When the leadership is immature, the result is the same as that of the Congress party today. Rahul Gandhi has started such a tradition that will divide the country and society. An amount of 4.5 crores is not much for any state government, even if it is a poor Punjab. In whose treasury there is often no money even to pay salaries to government employees. Now if a person dies in an accident or demonstration in Chhattisgarh or Punjab, then his family will not demand compensation of Rs 50 lakh from the state government?

Rahul Gandhi robbed the accolades, at least that was his wish. But this announcement will have far-reaching and sad consequences, due to which the troubles of the state governments will increase in future. After the rise of Rahul Gandhi, the thinking of the Congress party has become that the best and easiest way to woo the voter is to spend money.

Rahul Gandhi needs to curb politics by opening his treasury

Farmer’s loan waiver in state elections, freedom not to pay pending electricity bills, demand for financial assistance to all displaced people in Corona, announcement of Nyay i.e. minimum income scheme in 2019 general elections, under which Congress party after forming government Has announced financial assistance of Rs 72,000 every year to 20 percent poor families of the country. The list is quite long. It is a different matter that despite this, the public rejected Rahul Gandhi as the Prime Minister of the country. It would be good in the interest of the country and the Congress that Rahul Gandhi should curb the politics of opening the treasury, otherwise if his dream of becoming the Prime Minister is ever fulfilled, then the country will surely become a pauper.

UP: A horrific road accident in Barabanki! 9 killed on the spot, 27 injured in bus-truck collision

Tata will have Air India! Final deal will happen in Navratri! The government can announce it on Friday

Vehicle Scrappage Policy: Why is there a 25 percent discount in road tax on buying a new one by selling an old car, know the benefits of this scheme of the government