Where is the Dalit vote in UP: There is no single caste in politics, the alliance of castes is successful 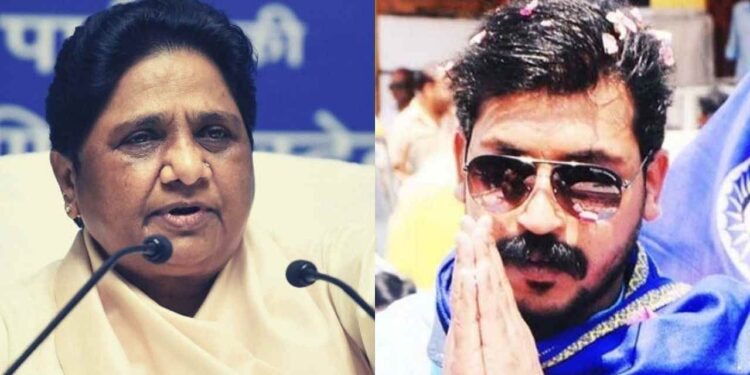 The Bhim Sena may have made a dent in Mayawati’s Dalit vote bank in western Uttar Pradesh. But only those people can take politics forward, who have flexibility and the art of saying timely. Chandrashekhar lacks it. But there is no doubt that Mayawati is a master in this art.

“Tilak, scales and sword, hit them with four shoes!” Like the slogans are now in the air. Three decades after the Mandal reservation was approved, even those who raised such slogans realized that the country’s politics is run by the unity of different communities and not slogans. Perhaps that is why no one paid attention to things like “boycott Brahmins and send them to Volga” in Lucknow by Nand Kumar Baghel, father of Chhattisgarh Chief Minister Bhupesh Baghel. In Uttar Pradesh elections today, every political party needs Brahmins, Muslims, Dalits. Because no matter how much one boasts of its population, it is impossible for a coalition of two other castes to come into the government.

Leaders also keep changing. Mayawati, who once used to be an umbrella leader of Dalits, especially Jatavs in Uttar Pradesh, has been dented by Chandrashekhar Ravana in western Uttar Pradesh. And today Chandrashekhar Ravana has emerged like a comet among the Jatav community in western Uttar Pradesh as a domineering leader. However, he has not yet got an opportunity to show his power in any election. Because his rise was only after the arrival of the Yogi government in Uttar Pradesh. But in May of 2017, he had already made it clear that today the Dalit is a force, to reject it is a way of looking backwards.

What happened in Saharanpur five years ago was not an accident, but it was feared that something like this would happen one day. The battle for supremacy will continue in Saharanpur. And that’s what happened. The struggle between the Rajputs and the Dalits was not a fight for some kind of increase in wages or to give a higher share of the crop to the shareholder, but it was a fight to establish their respective power.

That one incident of Saharanpur, Dalits are no longer bonded

Whatever may be the meaning of the word Dalit, but the power of Dalits cannot be suppressed or ignored like in the feudal period. But the youths of Rajput caste in Saharanpur could not understand that power and they started playing DJ while passing through their locality as before. And like posing to kill an imaginary enemy, he started waving a sword in the air. The Dalits found this act of Rajput youths rhetoric and they objected but they did not listen. The result of this was that stones and gummies started moving from both the sides and in this turmoil a youth of Rajput caste was killed. This is the incident of 5th May 2017. When some youths were returning to their village Shabbirpur after participating in a program on Rana Pratap Jayanti in Shimlana village of Saharanpur. Since he had to pass through the Dalit settlement located on one side of the village to reach his home. But even there he neither closed his DJ nor kept the swords in the sheath.

A few days before this, there was a ruckus on Ambedkar Jayanti. That is why the Dalit youth felt that they wanted to show their domination over the Dalits by showing sword and wanted to tell by playing DJ that they can do anything anywhere. He was refused by the Dalit youth but he did not listen. And meanwhile it got hot. Seeing their confrontation, the Dalit women felt that the Rajput youth wanted to attack them and in this misunderstanding, those women climbed on the roof and threw bricks and stones at some of the youths, the Rajputs fled. The running man runs in every direction after saving his life. In the stampede, a youth of Rajput caste fell and got buried. He died. When these fleeing youths reached Maheshpura village, they came to know that a young man was missing.

They felt that many people were trapped there and perhaps even the police was not helping them because the Thanedar of the Badgaon police station there, since he is of Dalit caste, he must have supported those Dalits. He called other homogeneous youths from Shimlaana. When he again came to Shabbipur and saw the youth of his caste lying dead, anger erupted in him and the response to that anger was that Rajput youths burnt down the Dalit settlement of Shabbipur. All the houses were destroyed. Women, children and old people left the shelter and ran towards the forest and the fields. By the time the police arrived from the district headquarters, the Dalit settlement of Shabbirpur had been destroyed.

To pressurize the police and administration, the young man was cremated overnight. Although doing this was not scriptural according to Hinduism, but if it was not done, there was a possibility of further ruckus, so the wise elders of the Rajput caste agreed. But even behind this peace, unrest was hidden. The Rajput youth considered this as an insult and the Dalit youth felt that the Rajput people would not agree and they would definitely attack one day or the other. Since the Shabbirpur incident had terrified them, they began to unite. Bhimsena working among them indirectly helped this. The Bhim Army or Bhim Sena was an organization of Dalits that was active at that time in Saharanpur and Muzaffar Nagar, as well as in some neighboring districts of Haryana and Uttarakhand.

Its activities were detected in Karnal, Yamuna Nagar and Ambala districts of Haryana, besides Jalandhar and Hoshiarpur in Punjab. Although till then the hand of any political party was not being told behind it, but at any time, political parties jump in by making any event the center. This happened on the Saharanpur issue as well. It is said that it was helped by former BSP MLA Ravindra Molhu. Dalits were united through social media. And ghee was poured into this fire. The Bhim Army decided that they would organize a meeting on May 9 at Gandhi Park in Saharanpur city to protest against the Shabbirpur incident.

Since permission for this was not taken from the administration, the police was in Gandhi Park and by waving sticks, drove the Dalits away from gathering there. But even the administration had no idea that Dalits would unite in such large numbers. Dalit youths from all the surrounding districts were coming there and after the extermination of the police, they did not go from there, but settled in the Dalit settlements adjacent to the Saharanpur city limits.

They were coming from all around. Coming from Chilkana Road, Dehradun Road and Shabbirpur, the dalit herds turned aggressive. Stone pelting started from Dalit settlements and in Ramnagar, they broke the building of Rana Pratap Bhavan under construction. Some of the media people standing there should have taken his photo, then they chased the media people, then they ran away but burnt their bikes parked there. Ramnagar outpost also went under the grip of his anger, while the poor outpost in-charge was a Dalit. The police, who came to drive them out, ran and in this chaos, along with the SP city, the ADM administration was also injured.

The SDM had to save his life by running away. After this the crowd moved towards the city and started hustle and bustle on Delhi Road and Court Road. Then the DM in Saharanpur was NP Singh and SSP Subhash Dubey. These people themselves went and met Chandrashekhar, the leader of the Bhim Army and said that if the chaos increases, they will be forced to fire and whatever happens after that will not be the responsibility of Bhim Army but Chandrashekhar himself. Then Chandrashekhar came in awe and somehow pacified the crowd.

Speech and tact in Mayawati

But this one incident gave an opportunity to the Jatav caste of Dalits in Uttar Pradesh to show their strength and also that they are now fed up with Mayawati’s wailing and money politics. Chandrashekhar Ravana’s face came to the fore. But Chandrashekhar lacks the kind of speech-tact and courage needed to survive in politics. They could not spread their power especially during the CAA protests, so they could not expand as a political party. Only those people can increase politics, who have flexibility and the art of saying things according to time. There is no doubt that Mayawati is a master in this art.