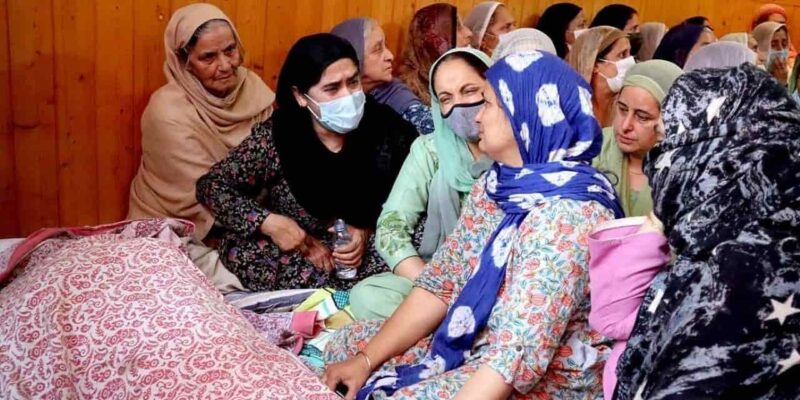 On Thursday, two people were killed in an attack by terrorists at the Government Boys Higher Secondary School in Srinagar. One of them was the principal of the school and a teacher. One of the two teachers killed in the firing by the terrorists is a Kashmiri Pandit, who was currently living in Batamaloo Srinagar. He has been identified as Deepak Chand from Jammu. The other woman is the school’s principal, Supinder Kaur. Deepak Chand always used to invite his relatives in Jammu to visit Srinagar, alluding to the good weather and good people. So the principal of his school took his new car to Srinagar for the first time.

Last week, Deepak Chand had come to Jammu to drop his wife and daughter home before returning to work in Srinagar. Chand’s cousin Vicky Mehra told that around 7.30 pm on Wednesday, he had called his elder brother and said that he would come home on Ashtami (the eighth day of Navaratra). He had also spoken to his aunt and called her to Kashmir. . Within 24 hours of all these things, Chand was shot by the terrorists. The terrorists also shot the school principal Supinder Kaur.

Used to ask family members to come to Kashmir

Deepak Chand had been teaching in Kashmir for the last four years since his appointment under the PM’s employment package for Kashmiri Pandits. Vicky Mehra told that Deepak was very happy here and used to ask all the family members to come to Kashmir. He used to tell us that there is nothing to fear, the people are very nice, the weather is nice and there is no tension. Chand is survived by his wife Aradhana and mother Kanta. His father Lal Chand passed away last year. The family also includes his elder brother Kamal Mehra and a married sister.

went to school for the first time in a new car

On the other hand, at Alocha Bagh in Srinagar, Supinder Kaur’s sister-in-law said that she went to school for the first time in her new car. She had been learning to drive for three years. Jasleen Kaur, daughter of Supinder Kaur, said that she had spoken to her mother on the phone. Jasleen, a student of class VII, said that I was taking my online class when her call came and when I called again, no one called did not answer. Later the family got information about the firing. Supinder Kaur, a resident of Budgam, had come to the area about a decade ago with her husband Ramresh Paul Singh and their daughter and son. Both his children are students of Delhi Public School-Srinagar.

On Thursday, terrorists opened fire on civilians in Idgah area of ​​Srinagar, Jammu and Kashmir. While two teachers were killed in this firing incident, many civilians are injured. Two people were killed in the Government Boys Higher Secondary School in Srinagar in the firing by the terrorists. One of them was the principal of the school and a teacher. One of the two teachers killed in the firing by the terrorists is a Kashmiri Pandit, who was currently living in Batamaloo Srinagar. He has been identified as Deepak Chand from Jammu. The other woman is the school’s principal, Supinder Kaur. A police officer said that around 11.15 am, three terrorists shot dead two teachers in Sangam Idgah area of ​​Srinagar district. The search is on for the attackers by cordoning off the area.

Also read: Pakistan’s armored hideouts will be destroyed, paratroopers will show the picture of Indo-Pak war, know what will be special in Air Force Day

Also read: Air Force Day Parade: The sky will be painted in the colors of 1971 victory! Rafale, MiG and Mirage will fly, the chest will swell with pride

These dangerous pests and diseases are found in lemon crops, these are their symptoms, farmers should protect like this

How CSR money will be spent on agriculture and rural development, experts brainstormed