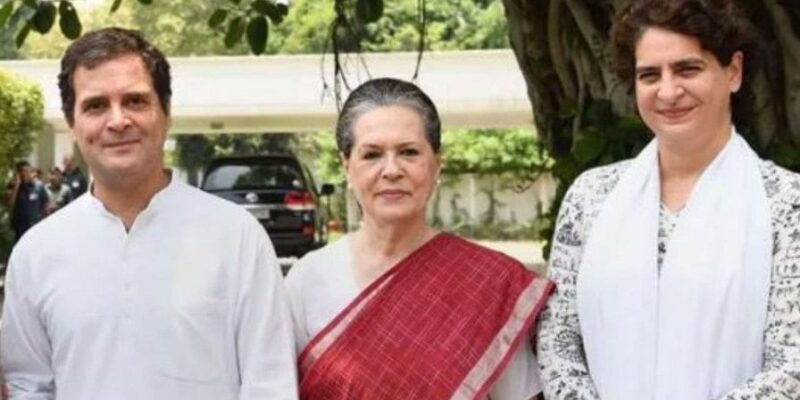 From the Peron and Marcos families to the Bhutto family of Pakistan, everyone played a long innings at the crease of politics and remained the favorite of the people in their respective countries for a long time. But, eventually he too had to return to the pavilion after being run out. The Kennedy family also got a lot of importance in America, but time and one tragedy after another ended their innings. In comparison, the innings of the Gandhi-Nehru family is going on continuously. Even after reaching the worst of times, he returns to the discussion again. The question arises that what is the secret of his long innings?

No member of the Gandhi-Nehru family has done any remarkable work in the last ten years. Apart from visiting the controversial places and pointing fingers at the policies of the government, there has been no significant contribution to the country during this period. Congress party is no longer as strong as before, its condition is deteriorating day by day. Despite this, whatever the people of the Gandhi-Nehru family do, it becomes headlines. If Priyanka Gandhi even sweeps the floor, then she comes in the news. Even if Rahul Gandhi goes to meet the victim’s family to express sympathy after someone is murdered, he gets a lot of publicity. Varun Gandhi and his mother Maneka have not been placed in any forum or committee of BJP, they do not have any special intervention in the politics of the country, yet both get full attention.

We are running after the Gandhi-Nehru family. For example, every movement of Sonia Gandhi becomes news – she is not only mentioned, but she is in the headlines. The Express even carried a full report on Priyanka’s son Rehan Gandhi and her desire to become a photographer. People blame the media for this. They argue that the existence of the Gandhi-Nehru family is intact because of the media environment created. To some extent this may also be true. But if the readers or viewers do not want to know about them, their news will not be worth selling, then perhaps the media will also not give them any importance.

The question arises that why is there such a deep attachment to the Gandhi-Nehru family in our country? Is it not the psychological effect of the name Gandhi-Nehru, in which we see these names associated with the freedom struggle? By giving importance to the present generation of this family, are we repaying the debt of what Nehru, Indira and Rajiv did for the country? Are we apologetic for the violent murders of Indira and Rajiv Gandhi? To some extent, all these factors can also work. Apart from this, our respect for ‘majestic thatt’ can also be responsible for this. It may sound strange, but the influence of ‘my-baap’ culture is present in our brain and social DNA. This is the reason that many times we give false praise to even the inferior leaders.

Due to family tradition, the roots of dynasty are deep in the country.

The Washington Post writes: This country is fascinated by the Gandhi-Nehru family and follows their every move. Dynastic politics has deep roots in India due to family tradition. One-third of the members of the Lok Sabha have entered politics due to some or the other family connection.

Writing in The Hindustan Times, Ramachandra Guha says, “The three most important persons in the Congress party are Gandhi, Gandhi and Gandhi. All three are from the same family – one of whom is the mother of the other two – and have lived most of their lives under one roof. All these came into politics simply because some family member was sitting on a high position. (The mother joined the Congress party as the wife of a former prime minister. Both the children joined the Congress party because their parents had been former presidents of the party.) In a professional sense, Gandhi, Gandhi and Gandhi are all known. Some are inherited and have special features. Wherever he is, he is only because of his surname.

It is clear that the name Gandhi is a magnet which draws us towards itself. This may be due to our subconscious mind, but kneeling has also become a part of our nature. But wasn’t this an overly simplistic explanation of it? Apart from this, there will be many other factors. Otherwise the influence of the Gandhi family would not have lasted so long. No single dynasty has had such long control in the politics of modern India.

All kinds of mud was thrown at the Nehru-Gandhi family. The name Pappu has become a joke today. Sonia Gandhi was attacked for being of foreign origin. Priyanka was also surrounded by allegations of alleged scams against her husband, in which her grandmother Indira Gandhi’s face was seen due to the similarity of nose and shape, but she could not touch her heights in politics. Varun and Maneka were not even seen speaking in the last few years, but if Varun decides to go to Lucknow today, it will be a hit. Now why this is so, the answer to this question has not been found till 2021… and till the answer is not found, the Gandhi-Nehru family will continue to bat at the crease.

Are you not buying fake sweets instead of real in festivals? Check with these 5 easy ways

Uber Cup: Indian women’s badminton players make it to the quarter-finals with their second consecutive win