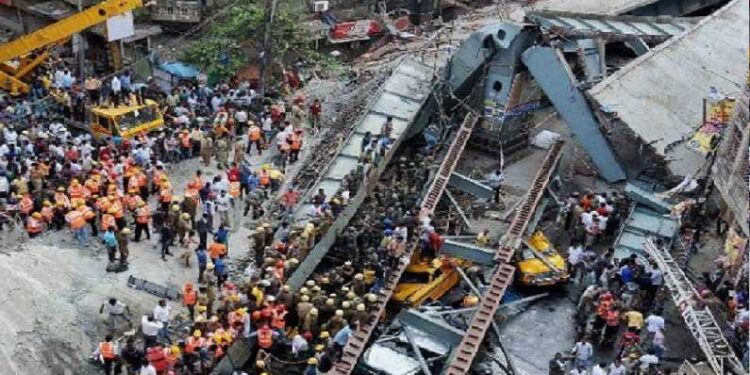 After five years, the Mamta government has finally decided to demolish the Poppy Flyover or Vivekananda Flyover. The flyover under construction had collapsed on March 31, 2016, before the assembly elections. 27 people died in that incident. The flyover is in a dilapidated condition for a long time.

On Wednesday, Firhad Hakim, Chief Administrator of Kolkata Municipality, met the members of the Poppy Bazar Merchant Association and then announced the decision. The demolition work of the flyover will start in four phases from June 15. In the first phase, a part of the flyover will be demolished in 45 days.

Flyover will be broken in four phases

Chief Administrator Firhad Hakim said that the vehicles plying on the road would be diverted for demolition work, the municipality would hold a meeting with the traffic department of Kolkata Police. The meeting will decide after the first phase how the remaining three phases are broken down. Chief Minister Mamata Banerjee had constituted a committee under the chairmanship of the Chief Secretary. Which will decide what will be their future after the collapse of the flyover. First of all, the health of the flyover was checked by the experts of Kharagpur IIT. But since his report was unclear, the government had given the responsibility to eminent bridge expert VK Raina. He suggested that the flyover under construction should be demolished after a thorough analysis. The state government is going to give importance to that opinion. The responsibility of demolition has been given to RITES, a subsidiary of Railways.

On 31 March 2016, a 60 meter long and 24 meter wide section of the Vivekananda flyover fell on the ground 30 feet below on the buses, vehicles and pedestrians passing below amidst heavy traffic in the afternoon. Due to this 27 people lost their lives while many people were injured. Preliminary investigation revealed that close relatives of Jorasanko MLA Smita Baksi used to supply materials for the construction of the flyover. They had supplied poor quality material due to which the flyover collapsed.

Bengal: Alapan Bandyopadhyay, for whom there was a war between Modi and Mamta, now Chief Advisor to CM, know how much salary you will get?