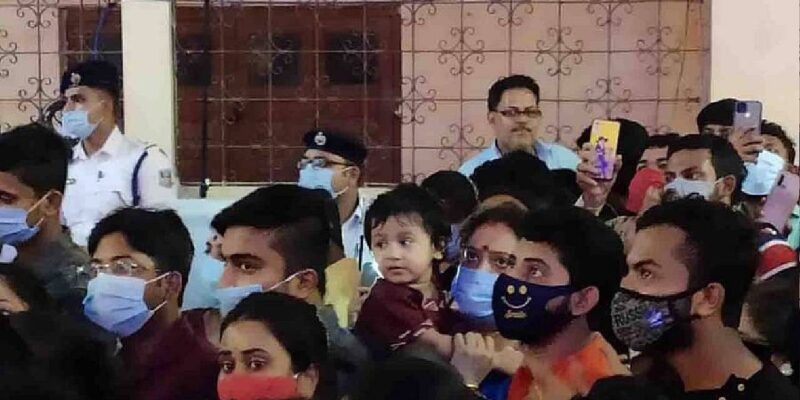 West Bengal at present Durgotsav (West Bengal Durga Puja) has been painted in color. Durga Puja pandals in districts along with Kolkata since the day of Chaturthi (Puja PandalsThere is a huge crowd of people coming to see. Mahasaptami on Tuesday (MahasaptamiOn the occasion of ) there has been a huge crowd on the streets of Kolkata. The devotees are not following the corona protocol and its effect seems to be on the case of corona infection. Corona’s positivity rate in the last 24 hours (Corona Positivity Rate) has increased. It has increased from 2.32 to 2.50.

According to health department sources, the positivity rate of corona has increased to 2.5 in the last 24 hours. 180 people have been infected from Corona in Kolkata and 124 people in North 24 Parganas. Corona infection has also increased in Howrah and Hooghly districts. Let us tell you that during the four days of worship, the corona vaccination is completely closed and the investigation of corona has also been affected. Due to this, it is being feared to increase further.

On the other hand, amid the fear of the third wave, the corona protocol has started breaking due to the increasing movement of people and thousands of crowds thronging the pandals. Despite the appeal of the state government, most of the people who visit the puja are roaming without masks, flouting the rules and physical distance has become a distant thing. At the same time, the way people are gathering even before the worship of Maha Ashtami and Navami, it is an indication that this year there is going to be a crowded puja, which will be done by the state government, puja organizers and medical experts. Also got sleepless nights. A large number of people were seen in and around the pandal since Monday afternoon in parts of north and south Kolkata and the crowd continued to swell till late in the night.

Here, given the increasing crowd, public health experts have warned of a new surge in Covid cases if people do not follow physical distancing and join crowds without masks. A senior police officer said, “Singhi Park in Gariahat and parts of Ekdalia Evergreen started thronging the youth from around 2 pm. Here, due to the increasing crowd, the police is also having to struggle a lot.