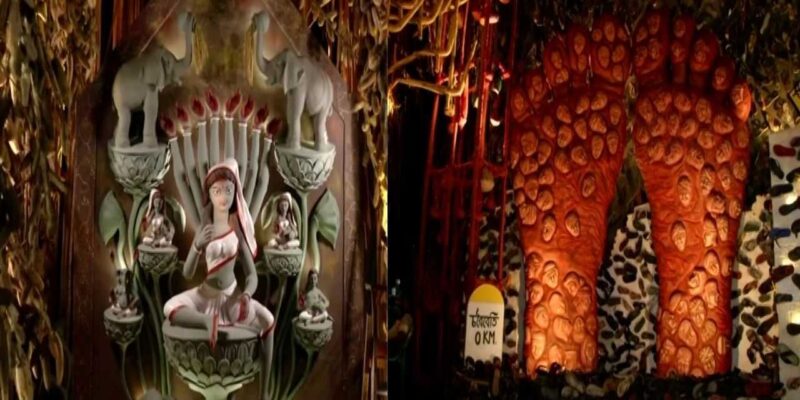 Photo: The story of the farmers’ movement will be seen in the Durga Puja pandal of Kolkata.

The three agricultural laws of the Center (Agriculture Laws) is going on for the last one year. On October 3, Lakhimpur Kheri in UP (Lakhimpur Khiri ViolenceThe violence in ) has given further air to this movement. Corona Pandemic and Peasant Movement (Farmers MovementTen-day Durga Puja has started in West Bengal. Durga Puja in West BengalWest Bengal Durga Puja Pandal) Theme based pandals are made during the festival. This time a Durga Puja pandal in Kolkata has made the theme of the farmers’ movement. A giant replica of a tractor being used by farmers at the entrance of the Dum Dum Park Bharat Chakra pandal in the northern edge of the city depicts their struggle.

Please tell that Durga Puja has started in Bengal with the offering of ancestors on the occasion of Mahalaya on Budhwara. Durga Puja is celebrated with pomp in Bengal, but in view of the Corona epidemic, there will be Durga Puja this year as per the directions of the High Court. The West Bengal government has issued a new directory for the historic Durga Puja taking place between the weakening second wave of Corona and the possible fear of the third wave.

The organizer said, “Our artists also thought that a pandal should be made on the farmers’ protest. It is discussed not only in the country but all over the world. We thought it was the right time.” pic.twitter.com/G6mH8vsqoS

The poster reads – ‘We are farmers, not terrorists’

On the pavement there is a sketch of a car and a farmer lying on its way with a line written in Bengali – “Motor gaadi ude, dhulo niche pode chashigulo”, which means the car leaves a plume of dust, the farmer on its wheels. fall under. Hundreds of chappals are seen lying on the ground, symbolizing the scenes of protest. This tells that the shoes of many people remained there during the police action. The main pandal is decorated with replicas of paddy hanging from the ceiling. Anirban Das, the artist who made it, told that the names of the farmers killed during the agitation have been written on a chit of paper on the huge tractor. It also has wings. Anirban says that the wings symbolize the desire to be free from bondage. A poster in the pandal reads – We are farmers, not terrorists, farmers are food soldiers. Prateek Chaudhary, secretary of the Puja Committee, says that we want to show the exploitation of the farmers.

Kolkata Durga Puja 2021: ‘Maa Durga’ will kill ‘Coronasur’, Durga Puja of Mohammad Ali Park will give a message of victory over Corona

Imran is ready to forgive the terrorist organizations that killed 80,000 Pakistanis, people said – who gave you the right?