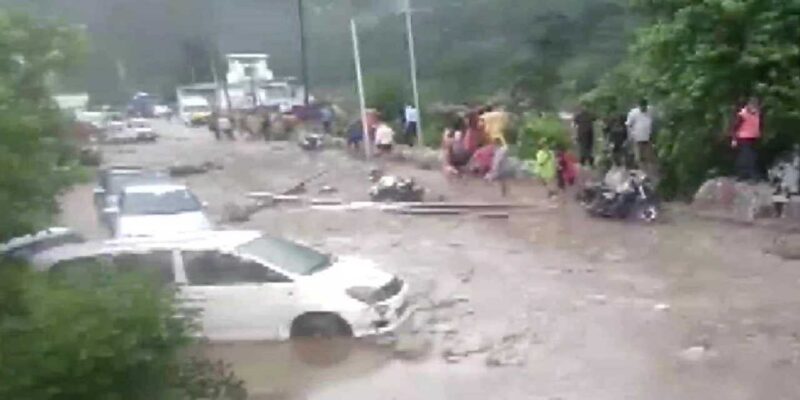 Uttarakhand (Uttarakhand Cloud Burst) In Chamoli district, there has been a flood situation since the cloudburst. In this incident, the tents of laborers working for the Border Road Organization (BRO) in Pangati village of Narayanbagar block of Chamoli have also come under the grip of floods. SDRF team is rescuing the workers and at present there is no news of any casualty. Earlier, the Rishikesh-Badrinath highway near Uma Maheshwar Ashram (Karnprayag) was blocked for about eight hours due to a landslide from the hill. Debris was removed from the NH side by installing machines in the night, but again at night, the hill was closed and the traffic stopped.

Around 200 vehicles are stranded in the area since the landslide. Pilgrims and others are staying in nearby hotels seeing the highway not opening at night. On Saturday and Sunday, debris from the hills near Uma Maheshwar Ashram in Karnprayag came on the highway, due to which vehicles going to Badrinath, Joshimath, Chamoli, Gopeshwar including Karnprayag, Rudraprayag, Srinagar and nearby areas were stuck. According to the information received, this road has been opened late at night. On the other hand, during the rainy season on Allweather Road, many new landslide zones are coming up from Srinagar to Lambagad on Badrinath Highway, the biggest one is visible near Uma Maheshwar Ashram.

The cloud burst incident in Uttarakhand’s Chamoli district has affected temporary shelters of BRO (Border Road Organisation) labourers in Pangati Village of Narainbagar block. According to the district administration, no casualties have been reported so far. pic.twitter.com/q5d4PGyqcM

The enthusiasm of the pilgrims is increasing continuously to visit the four Dhams of Uttarakhand. About 42 thousand e-passes have been issued within two days of starting the journey. Booking for Kedarnath Dham for darshan on weekends and Navratras has been completed. In two days, more than 2500 pilgrims have visited all the four Dhams. E-passes are being issued by the Devasthanam Management Board for the journey to Badrinath, Kedarnath, Gangotri and Yamunotri Dham. Only after that Darshan is allowed in the Chardhams. So far more than 42 thousand e-passes have been issued by the board. Travelers can get e-pass for all the four dhams by booking in advance till October 15.

Ravinath Raman, Chief Executive Officer of Devasthanam Management Board said that there is a lot of enthusiasm among the people to visit Chardham. Advance booking has been completed for Kedarnath Dham on weekends and holidays on Navratras. He said that on the guidelines of the High Court, e-passes are being issued on the basis of the number of passengers fixed on a daily basis. Pilgrims are having darshan following the COVID protocol in all the four Dhams.

First FIR: When, who and why was the first FIR lodged in the country, in which police station the report was written?

Delhi Traffic Rules: Now if caught driving without this paper in Delhi, license will be canceled, a fine of 10000 will also be imposed.