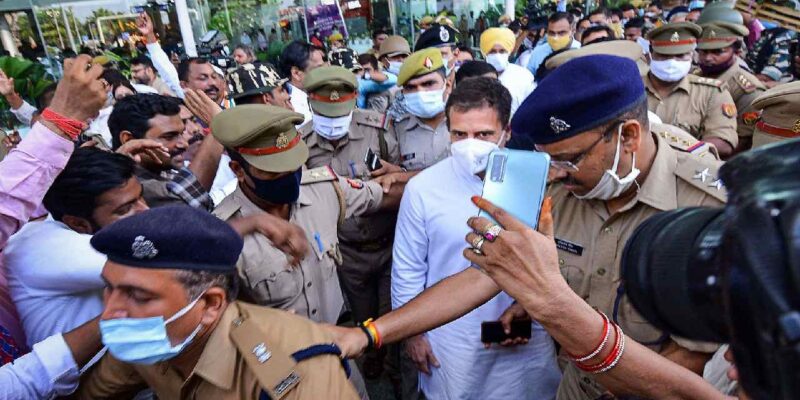 For the last four days, the Lakhimpur incident of UP has been a topic of discussion in the whole country, but till now the accused of this case has not been arrested. Due to which the politics has heated up from UP to Delhi. A little while ago, Congress leaders Rahul Gandhi and Priyanka Gandhi Vadra reached Lakhimpur. They are accompanied by Chhattisgarh Chief Minister Bhupesh Baghel, Punjab Chief Minister Charanjit Channi, KC Venugopal, Ajay Kumar Lallu, Deepender Hooda. Along with Rahul and Priyanka Gandhi, all these people are going to meet the families of the victims of Lakhimpur violence. Let us tell you that before this there was a political stir from Delhi to Lucknow. We will analyze it further.

Congress leaders Sachin Pilot and Pramod Krishnam were taken into custody by the police. Both were going to Lakhimpur Kheri. In Moradabad, the police stopped them and took them into custody. Sachin Pilot said that the police is not telling where he is being taken. On the other hand, Bharatiya Kisan Union spokesperson Rakesh Tikait has said that the arrest of accused Ashish Mishra should be done within the stipulated time. There should be an impartial inquiry by a committee of retired judges. Rakesh Tikait also said that if all the demands including investigation are not accepted. So the United Kisan Morcha will take a tough decision. Meanwhile, UP’s ADG, Law and Order Prashant Kumar said that the investigation of the Lakhimpur case is going on in a transparent manner. Very soon this case will be exposed and no matter how powerful the criminal may be, he will not survive.

In order to investigate the Lakhimpur violence, the police has also issued a helpline number. This number is 9454403800. The police has appealed to the people to send videos related to violence on this number. The police have also said that the identity of the sender of the video will be kept secret. This is a matter of investment. Now there is talk of political ruckus at Lakhimpur, whose heat has reached Maharashtra. In Maharashtra, the three parties of Maha Vikas Aghadi have announced a bandh on October 11. At the same time, Minister in Punjab Government Pargat Singh said that Punjab Congress will leave for Lakhimpur Kheri on 7 October with a convoy of 10,000 vehicles. So here the question arises whether the road for the 2022 UP elections will pass through Lakhimpur?

For three days, Lakhimpur Kheri in UP has remained a political epicenter.

Call it the intention of getting justice to the farmers or the strategy of political riots of 2022. For the last three days, Lakhimpur Kheri in UP has remained a political epicenter and there has been a ruckus on Lakhimpur violence from Sitapur, Lucknow to Delhi. Congress Rahul Gandhi leader said, ‘Be it Priyanka, I am or whoever is in our family, we do not care about man-handling. Kill us, cut us, we don’t care. This is our years old training. This is the training of our family. The voice of India is being crushed. I want to share the pain of the families of the victims. I want to go there and know the ground reality. I want to understand No one knows the ground reality right now.

Heard you, the work which is of the police and administration, the matter has moved towards the court. Rahul Gandhi wants to solve it and these things before Rahul traveled from Delhi to Lucknow, he reached Lucknow from Delhi on a regular passenger flight with Chhattisgarh CM Bhupesh Baghel and Punjab CM Charanjit Singh Channi at around 2.30 pm and at the airport. He sat on the dharna. Actually, the administration wanted to take Rahul Gandhi ahead of the airport by government car, but he remained adamant on the insistence of going by his own car.

Congress leader Rahul Gandhi said, ‘If you do not allow to leave, then you will not leave the airport by dharna. Be it one day, two days, 15 days. Rahul said, ‘The government wants to do some bullying, I don’t know what but they have some plan. They want to take me in a police car like a prisoner. After a long time, the administration allowed Rahul Gandhi to go by his car. After this Rahul Gandhi, Bhupesh Baghel and Charanjit Singh Channi left for Lakhimpur.

Meanwhile, news came that Priyanka Gandhi, who was arrested in Sitapur guest house, was released, after which it was decided that Rahul Gandhi would first reach Sitapur and then go to Lakhimpur Kheri with Priyanka Gandhi and Rahul Gandhi’s car reached Sitapur at around 5 pm. It is worth noting here that since October 3, that is, from the night of the incident. Congress tried to capture the issue of Lakhimpur. Despite the imposition of Section 144, she left for Lakhimpur Kheri overnight, due to which she was detained in Sitapur and from here the Congress took forward the battle of Lakhimpur.

The guest house where Priyanka was kept in custody. There she was seen doing Gandhigiri with a broom. By showing the video of violence from mobile, she kept targeting PM Modi and encouraged the party workers through the address of mobile video. However, from Sitapur, Rahul and Priyanka proceeded towards Lakhimpur Kheri. Shortly before this, a big announcement was made by the Congress for the farmers killed in the Lakhimpur Kheri incident.

Both Punjab CM Channi and Chhattisgarh CM Bhupesh Baghel announced that 50-50 lakh financial assistance would be given to the families of the farmers and journalists killed in the incident. Meaning the Congress has jumped into the electoral state with full force. It is taking forward the battle of Lakhimpur and is looking for political land.

IPL 2021: De Villiers did not hit six on the last ball, RCB lost in a thrilling match against Hyderabad, missed a big opportunity too

IPL 2021 Orange Cap: KL Rahul is ahead in the race for runs, these players are behind